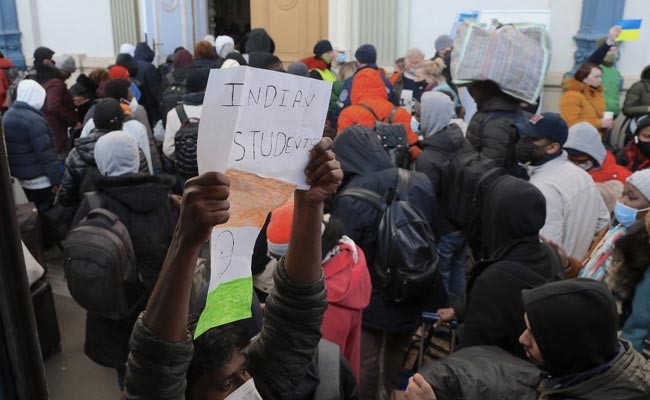 KYIV: Devising their own strategems to get out of Kyiv, about 100 Indian students stranded at the train station split into groups of 10 to board a train from the Ukrainian capital to city of Lviv where they would be safer, one of the students said.

“We realised no one is going to come to help us and it is up to us now,” 20-year-old Ashna Pandita said over the phone as the train took them to the western city of Ukraine, about 80 km from the Poland border, where the fighting has been relatively less.

“We split into smaller groups and somehow managed to board the train,” she added a day after the students from Taras Shevchenko National Medical University in Kyiv managed to escape from the back gate of their hostel and reach the Vokzal station, the capital’s main train hub.

Though they responded to an advisory from the Indian mission asking all students to “make their way to the railway station for onward journey to the western part”, the students alleged that officials had failed to provide any transportation to shift them to a safer location.

The advisory said “Ukrainian railways is putting up special trains for evacuation” but the reality on ground was quite different, Ashna and her brother Ansh, who studies in the same college, said. The twins are from Ghaziabad.

The group of 100 odd youths, including many women, were not allowed to board a train and Ukrainian guards thrashed some of them, they alleged.

After they were pushed away from many trains, the students split into smaller groups and somehow managed to get on to the train to Lviv, where the officials of many embassies are stationed.

The train was crowded and they could manage only standing space during the nine-hour journey.

“At least let us reach Kyiv,” Ashna said tearfully, recounting their struggles to reach the station from a city that had run out of food and cash in ATMs and then the many hurdles to get on to a train.

Left to their own devices, the students said they would either try to cross over to Poland or to the Hungary border, about 570 km from Lviv.

On Monday, the train station was teeming with people. The Indian students sat huddled together, holding a large tricolour aloft so they could be recognised in the crowd and also so no one from the group gets lost.

The students had also issued a video appeal.

“Indian embassy, we request you to evacuate us as soon as possible,” Ansh Pandita said in the video as his friends looked on.

Ashna, too, sent videos to family and friends at home. One showed a train with closed doors and shuttered windows.

“This train didn’t let us in. They closed the door on our faces. They pushed us out,” she said.

In another, students can be seen being pushed and chased away by guards.

Back home in Ghaziabad, Ansh and Ashna’s parents Anil and Sunita are frantic with worry.

“My children are suffering. They have nothing to eat and the irony is that we can’t do anything sitting here other than to appeal to the government to bring everyone back,” Sunita said. Their worries have escalated after an Indian student from Karnataka was killed in shelling in Kharkiv city on Tuesday morning.

“With profound sorrow we confirm that an Indian student lost his life in shelling in Kharkiv this morning,” the External Affairs Ministry said.

The government is sending four Union ministers as the prime minister’s envoys to Poland, Romania, Hungary, Slovakia and Moldova to oversee the evacuation of Indians from Ukraine through its border crossings with these countries.