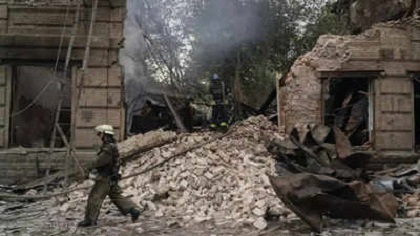 KYIV : Facing uncertainty at home and being called back by universities in Ukraine, Indian medical students who fled the war-torn country following the Russian invasion nearly six months ago are daring to go back to the campus. TOI has confirmed that at least six of them have resumed classes in their universities.
Anurag Krishna from Bhagalpur, Bihar, is a fourth-year student of National Pirogov Memorial Medical University in Vinnytsia in Ukraine. Anxious to complete his studies despite the war raging in the country, he was quick to respond to a call from his University to attend offline classes. He travelled to Istanbul in Turkey from Delhi and from there he managed to reach Moldova, a former Soviet Republic and east European country, by flight on July 7.

He reached Vinnytsia in west central Ukraine by road. He has been visiting a clinic in Kyiv, Ukraine’s capital city, as part of a practical class. “The eastern part of Ukraine is facing an attack from Russia. Normalcy is returning to Kyiv and Vinnytsia,” Krishna told TOI, adding, “The situation can be unpredictable, and the students will have to come at their own risk.” Students who reached Ukraine said the campuses have placed sandbags near windows of the buildings as a protection. Krishna said medical universities would begin classes on hybrid mode on September 1.

Jinovince, 27, from Thiruvananthapuram managed to reach Ukraine through Moldova three weeks ago. Navaneetha Sriram, 22, from Kovilpatti in Tamil Nadu and his three friends, students of National Pirogov Memorial Medical University, are planning to travel to Moldova soon. “We are final year students. We are going to apply for a tourist visa to Moldova and from there we can enter Ukraine by road,” said Sriram.

Jinovince is doing his last semester of his final (sixth) year at the university. “I was staying in an apartment in Vinnytsia. When the war began, around 50 students from our university came to my apartment in March and we decided to move out of the country. We managed to cross the border in a train and reached Hungary. From there, we managed to reach India,” said Jinovince.

After reaching India, Jinovince attended online classes. Due to Covid-19 restrictions, all students attended the online classes for more than one and a half years (2020-21). It was back to online classes due to the war. “I am going to attend the final semester and mostly it will be a practical class. The online course degree programme won’t be recognized by the National Medical Council in India. So, I travelled to Dubai from Thiruvananthapuram on June 17,” said Jinovince. From there, he flew to Moldova. Initially, authorities from Dubai and Moldova refused to allow him to travel in Ukraine. “I explained my situation and convinced them. I travelled to Ukraine from Moldova by bus and arrived on June 18,” said Jinovince.

Another word of advice from Jinovince: If students go to New Delhi to board flights to Moldova, the authorities won’t allow them to travel. But they can fly to one of the Gulf countries from airports in other states in India.