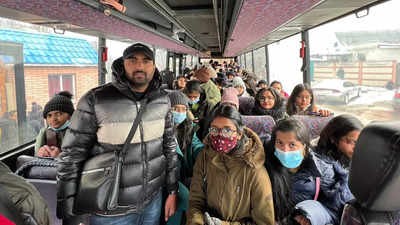 KYIV: India on Tuesday breathed a sigh of relief as all 700-odd students who were trapped in Ukraine’s conflict-hit Sumy were moved out of the city through a humanitarian corridor.

The students were taken to Poltava, some 175 km south of Sumy, from where they were to board trains to western Ukraine and from there return to India.

But evacuating the students from a city clobbered with rockets and heavy gunfire was nothing short of a herculean task for Indian officials. Here’s how it was managed …

Low on food and water, the Indian students in Sumy had been waging a doughty battle in bomb shelters and basements of their hostels in frigid weather.

India’s main concern over the last few days was to pull them out of the city to safer areas so they could board the rescue flights back home.

The challenge before New Delhi was to get Moscow and Kyiv to work in step with each other for the students’ evacuation.

This, according to official sources, was made possible by hectic diplomatic activities that followed PM Narendra Modi’s back-to-back conversations with President Vladimir Putin and his Ukrainian counterpart Volodymyr Zelenskyy.
The first attempt to evacuate students on March 7 had failed, despite ceasefire and planning.

Safe passage for students could not be secured as there was shelling and a lot of risks were involved, an official said.

However, channels of communication and efforts to secure the safe exit of students continued.

Apart from foreign ministry, the defence ministry was also in touch with officials in both Russia and Ukraine to aid evacuation efforts. A team of senior government officials was also sent to Ukraine to help in the evacuation, as a source put it, endgame.

Separately, India also engaged with Red Cross both in Geneva and Ukraine seeking assistance in evacuation. Indian ambassador to Ukraine and his team were also constantly engaged with local authorities.

The arrangements for the evacuation of stranded Indian students were made on both sides of Ukraine as well as the Russian border, reported ANI.
Hiring buses in the war-torn region was also a daunting challenge, said one official.

“It wasn’t easy as arranging almost everything and anything — drivers, fuel, busses — was an uphill task. Our estimate was that the evacuation will require 10-12 buses but eventually we managed to get a few more.”

Ukrainian drivers were not willing to drive towards the Russian side. However, finally, local arrangements for buses were made.

India demanded escort from Ukraine and it was provided after some delay, reported ANI citing official sources.

Red Cross also helped and humanitarian passage for all international students was created and students were finally evacuated. They were asked to maintain radio silence until they crossed the danger zone.

The Indian students then boarded the buses for Poltava.