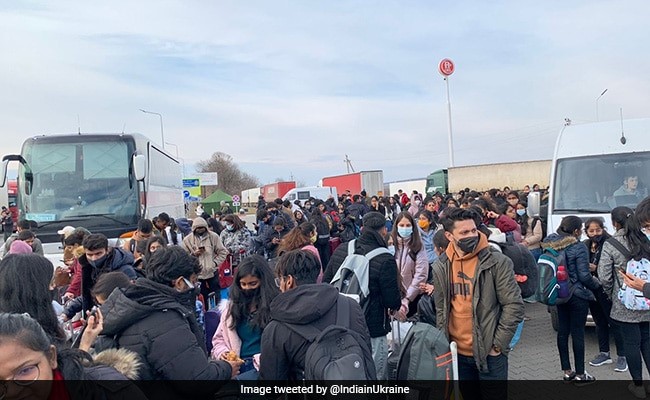 KYIV: As the Indian government issued an urgent all-caps appeal to its citizens to immediately leave Ukraine’s second-largest city Kharkiv, first-hand accounts of students stranded at the railway station gave a glimpse into their desperate situation.

“Right now it’s shelling on our head. It’s too bad a situation. There is no bunker nearby. It’s fully open. We had a train in front of us but they are not allowing us. One or two gates opened for Ukrainian people. Just for them. And for us there are guns, bullets but no trains,” an Indian student Pragun told NDTV.

“We took a lot of risks to reach here and 1,000 plus Indians are stuck in the railway station. We are waiting for the trains. They (Ukrainian guards) are firing, they are kicking us.

They are not letting us enter. I heard the gunfire myself. I want to tell the Indian government, if something happens to us here, please take care of our family,” he said.

Another student sent videos saying, they have been waiting at the station for three hours but are not being allowed on trains. Video clips sent by him showed by a large crowd of students gathered at the station in front of a train.

“One train came and went. We were asked to deboard. I don’t know why. It’s getting colder and snowing. We don’t know if we will be allowed on the next train either. There are so many students here. There are girls with us,” he said.

A third student, Himanshu Raj Mourya, spoke to NDTV, putting the number of stranded Indian students at 7-800 and saying that ordinary Ukrainians were stopping them from getting on the trains.

“Ukrainians are not letting us board the trains. They are firing guns. They are threatening us and scaring us off. Girls are being beaten,” he said.

Their nightmares were unfolding as the Ministry of External Affairs issued back-to-back advisories to all its nationals in Kharkiv to leave immediately for their safety, as Russian action intensified in the city.

The Indian Embassy — which had to stop operations in the Ukrainian capital Kyiv yesterday — said Indians should reach Pisochyn, Babai or Bezlyudivka latest by 6 pm local time (9.30 pm IST), on foot if need be.

Located in the eastern part of the city close to the Russian border, Kharkiv has been facing intense attacks since the invasion started. At least two Indian students have died since the conflict began – one in Russian shelling and another in a hospital while being treated for an illness.