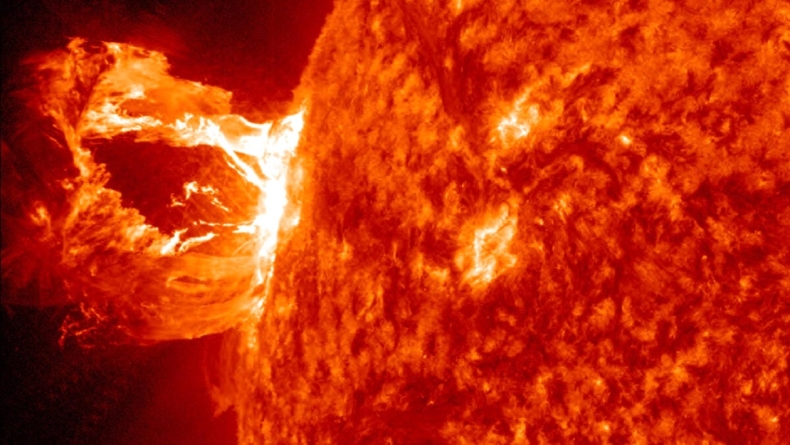 PARIS : The current solar cycle is intensifying with the expected peak of the cycle still one to three years away.
Why it matters
This cycle — Solar Cycle 25 — was expected to be weaker than average, but some scientists now say it could actually be among the most active since recordkeeping started in the 1700s.
What’s next
Sunspot and solar flare activity, which can disrupt communications and electrical systems on Earth, will increase until a peak sometime between 2023 and 2025.
There are early signs that we could be in for a wild space weather ride in the next few years. As the sun builds toward its next solar maximum, its surface grows unsettled with more sunspots, each with the potential to unleash solar flares and coronal mass ejections that can disrupt communications and electrical systems on Earth.
The sun reaches its solar maximum, or the point of the most intense sunspot activity, during part of the 11-year solar cycle that astronomers have been tracking since the mid-1700s. The last solar maximum in 2013-2014 was very muted, and scientists had predicted another quiet peak for this cycle, which is dubbed Solar Cycle 25. But with the next maximum still a year or more away, this cycle is already exceeding expectations for activity and may even be the most intense period we’ve seen on the sun since recordkeeping began.
“The sun’s activity has quickly ramped up and even though we haven’t reached peak levels in this cycle, the sun’s activity is already exceeding predictions,” Nicola Fox, rector of NASA’s Heliophysics Division, said on the space agency’s Solar Cycle blog. “Solar events will continue to increase as we near solar maximum in 2025, and our lives and technology on Earth, as well as satellites and astronauts in space, will be impacted.”
Solar Cycle 25 began in 2019 and will build to a peak of sunspot activity between 2023 and 2025 before falling off to a solar minimum about five years later when the sun will likely be completely blank and devoid of sunspots for a time. Then, the cycle starts again.
At the start of this cycle, forecasters were split on how Solar Cycle 25 would play out.
The official prediction put out by NOAA and NASA in 2020 foresaw a weaker-than-average cycle, similar to Cycle 24. But not all the experts were in agreement. Around the same time, a study led by Scott McIntosh from the National Center for Atmospheric Research was published in the journal Solar Physics.
Space weather impacts the Earth’s ionosphere in this animation.
NASA/GSFC/CIL/Krystofer Kim
In stark contrast to the consensus forecast, McIntosh and colleagues predicted that Solar Cycle 25 “could have a magnitude that rivals the top few since records began.”
The first half of 2022 saw sunspot and solar flare activity on the sun increase significantly, including some of the most powerful flares seen in several years. With the predicted maximum still a few years off, it seems that things are trending toward the McIntosh prediction of a more active solar cycle peak.
A new study out of Russia also predicts that this cycle could be among the most active ever and also suggests that maximum activity could come as soon as late 2023.
The disagreement illustrates how much more there is to learn about the sun’s behavior.
“Scientists have struggled to predict both the length and the strength of sunspot cycles because we lack a fundamental understanding of the mechanism that drives the cycle,” McIntosh said in 2020.
Studying how this cycle plays out could help cultivate that understanding, but it also threatens to disrupt our society on a scale never quite seen before.
If the upcoming solar maximum truly is one for the record books, it will come at a time when our presence in orbit and our reliance on satellite communications has grown exponentially.
Early this year, SpaceX reported losing a number of its Starlink satellites to an extended geomagnetic storm of moderate strength.
Previous solar maximums also caused some havoc on the ground with major impacts on the electrical grid, and little has been done to harden these systems or build in redundancies over the past two decades.
There is one possible silver lining, at least for some scientists: If this solar maximum temporarily disables our electrical and communications systems, it will also generate epic auroral displays.