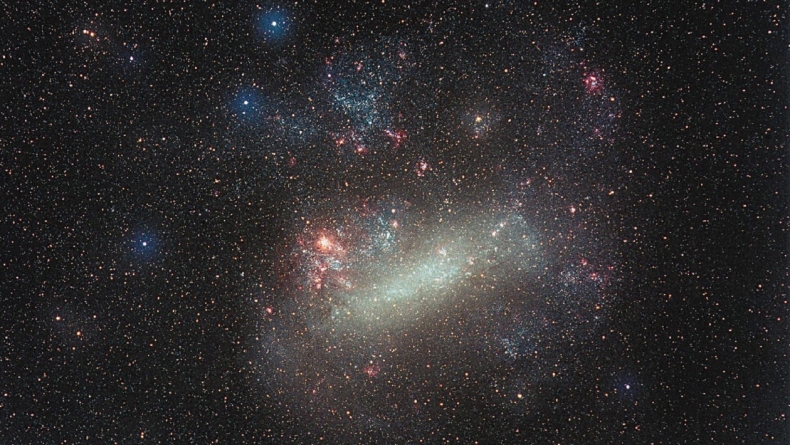 PARIS : We may finally know how the Large and Small Magellanic Clouds are mysteriously making stars. Just a space train stop from the Milky Way, two little galaxies have a fortified barricade protecting them from falling to pieces, astronomers said Wednesday in the journal Nature.
These starry realms are staunchly locked in orbit around each other, yet during their journey across the universe, they seem to be unraveling like balls of yarn. They perpetually leave stringy remnants of gas behind — you know, material integral to their galactic job: star making.
But there’s something weird going on.
Despite losing pieces of themselves for millenia, both these galaxies — the Large and Small Magellanic Clouds — are yet to be dismantled. And, yup, they’re still making stars.
“A lot of people were struggling to explain how these streams of material could be there,” Dhanesh Krishnarao, assistant professor at Colorado College, said in a statement. “If this gas was removed from these galaxies, how are they still forming stars?”
The answer? A galactic shield, of course.
By tapping into data collected by NASA’s Hubble Space Telescope and the now-retired Far Ultraviolet Spectroscopic Explorer, Krishnarao and fellow scientists realized the Magellanic cloud system is surrounded by a sort of thin hot bubble of supercharged gas. A shield, if you will.
This cocoon, or corona as the scientists call it, prevents these galaxies from spitting out too much of their gas supply even though the Milky Way’s immense gravitational pull tugs on the galaxies and space-borne phenomena try to invade them.
In turn, this sort of defense system is the reason our universe continues to be blessed with these galaxies’ starry twinkles.
“Anything that tries to pass into the galaxy has to pass through this material first, so it can absorb some of that impact,” Krishnarao said. “In addition, the corona is the first material that can be extracted. While giving up a little bit of the corona, you’re protecting the gas that’s inside of the galaxy itself and able to form new stars.”
At last, the Magellanic puzzle might be solved.

Awesome. Now what?
Already, experts had predicted the existence of the defensive Magellanic corona. It isn’t exactly a completely new find. What’s big about this discovery, though, is the fact that we now have eyes on the shield.
“The resolution of Hubble and FUSE were crucial for this study,” Krishnarao said. “The corona gas is so diffuse, it’s barely even there.”
Because this corona stretches more than 100,000 light-years from the galaxies it protects, it’s rather difficult to spot, so until now, this corona was only a hunch. But Hubble and FUSE were able to get around the corona’s invisibility hurdle because both powerful instruments have an extensive archive of data regarding some of our universe’s most extreme, brilliant marvels: quasars.
Quasars are pretty much giant jets of light protruding from the centers of active black holes, and they’re so bright they’re often more luminous than our entire galaxy. This brightness is key for the field of astronomy. Quasars act kind of like cosmic flashlights, serendipitously placed across the universe to elucidate even the darkest of interstellar secrets with dazzling illumination.
In this case, they were perfect tools to help us finally detect this kind of hypothesized, cagey corona around the Magellanic galaxies — and in fact, quasars also lit the way in 2020 for Hubble, when the beloved telescope found a similar protective corona surrounding the Andromeda galaxy.
For their new study, the team analyzed patterns of ultraviolet light from 28 quasars, then characterized what kind of material may lie around the Large Maganellic cloud first. 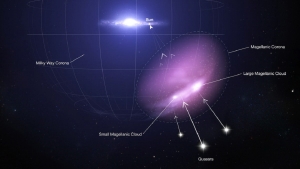 “It’s a perfect telltale signature that this corona is really there,” Krishnarao said. “It really is cocooning the galaxy and protecting it.”
Plus, unlike our Milky Way’s neighboring Andromeda galaxy, which sits about 2.5 million light-years away, the Large and Small Magellanic Clouds are, respectively, only 160,000 light-years and 200,000 light-years away from us, so they’re much easier to study, and therefore, their corona will be, too.
They’re also dwarf galaxies, which are thought to hold boons of novel information for astronomers, like insight into how galaxies arose and evolved in the first place long, long ago. According to NASA, coronas have been seen around more distant dwarf galaxies before, but they haven’t been probed with much detail.
“There’re lots of predictions from computer simulations about what they should look like, how they should interact over billions of years,” Krishnarao said, “but observationally we can’t really test most of them because dwarf galaxies are typically just too hard to detect.”
Now that limitation may be a thing of the past.