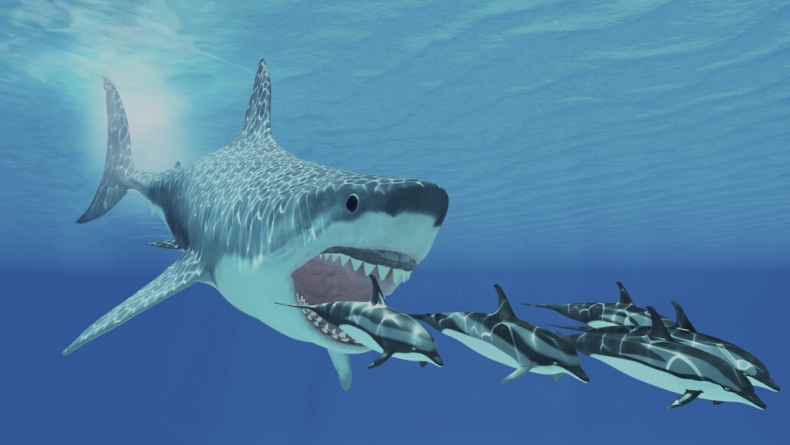 PARIS: For millions of years, megalodon sharks were top ocean predators — and then came the great whites. New analyses of teeth hint that competition for food from great white sharks may have helped give the megatoothed giants an extra shove toward extinction.

Scientists reconstructed shark feeding habits by analyzing zinc in the teeth of 20 living shark species and 13 extinct species, including megalodons (Otodus megalodon). Megalodons and great whites occupied a similar ecological niche, devouring marine mammals such as whales and seals, the researchers report May 31 in Nature Communications.

O. megalodon was one of the largest carnivores ever to live, growing to at least 14 meters long (SN: 1/12/21). This giant began menacing the oceans around 23 million years ago. When — and why — it went extinct isn’t clear. The species may have lingered until about 2.6 million years ago. Or it may have vanished as early as 3.5 million years ago, right around the time that the great white shark Carcharodon carcharias appeared.

To figure out if the two sharks dined on similar food, the researchers turned to zinc, which has two main forms: zinc-66 and zinc-64. The relative abundances of those isotopes, preserved in tooth enamel, can indicate an animal’s position in a food web. Plants — and plant eaters — are relatively high in zinc-66. Higher up the food chain, that 66-to-64 ratio decreases.

The analyses revealed that when and where O. megalodon and C. carcharias overlapped, the sharks had similar ratios. That finding suggests that their diets overlapped too, say geoscientist Jeremy McCormack of the Max Planck Institute for Evolutionary Anthropology in Leipzig, Germany, and colleagues.

Still, that the sharks consumed similar prey isn’t proof they were in competition, the researchers say. And there are many factors that may have helped drive megalodons to extinction (SN: 8/10/18). Those factors include ocean circulation changes, collapsing prey populations and competition for food with other ocean creatures, like orcas.