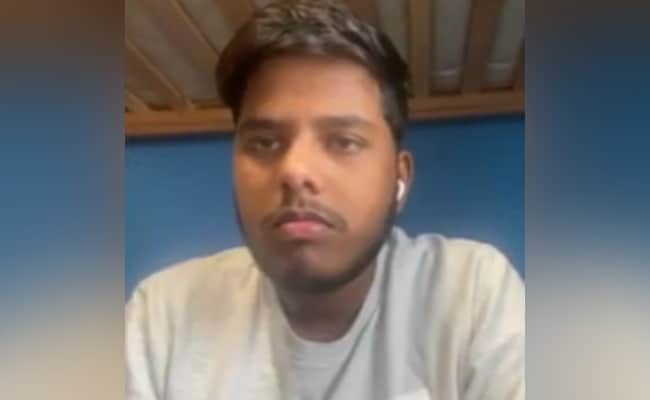 KYIV: On Thursday morning, Junaid Khan, an Indian student in Ukraine, was buying groceries when he heard a blast. As tension rapidly escalated, he learnt that his flight to India had been cancelled.

“When I spoke to my friends in Kyiv, I could hear four or five blasts. They were in panic and crying,” Junaid said from the Ukrainian city of Vinnytsia.

“I really hope that Indians are evacuated. I don’t know if you know this but two major cities of Ukraine have been taken over by the Russian army. We are actually scared…patrolling is going on,” he said.

The third year medical student was supposed to take a flight to Delhi on Sunday along with a few others.

That was before Russian President Vladimir Putin ordered the invasion of Ukraine in an early morning nationally televised address.

Moments later, Junaid’s friends, who went to catch their flight at the Kyiv airport this morning, were turned away.

“Some of my friends drove to Kyiv to catch their flight. They were evacuated but all their luggage was left at the airport,” he said.

The crisis truly sank in when he tried to contact the Indian Embassy for help.

There are around 15,000 Indians in Ukraine, mostly students.

Junaid said he and his friends never imagined that the situation would spiral so soon.

“Everything was normal,” he said. Until it wasn’t.

“There was news but there was no pressure. Our Dean advised against panic. We trusted our university, our embassy. But suddenly yesterday, a state of emergency was declared in Ukraine. That’s when we realised it’s time to leave. Kyiv is a dangerous place to stay,” said Junai.

“All my friends are booking train tickets. An hour ago, there was an explosion at an air base. The situation is getting worse. My parents are very worried.”

He had a message, but not for his parents. “I want to say to all other families – I wish we all come back soon. I want my parents and other parents not to worry and trust in the government. We will come back soon,” he said.

Hours after Russian President Vladimir Putin announced a major offensive in Ukraine, tanks and other heavy equipment crossed the frontier in several northern regions, as well as from the Kremlin-annexed peninsula of Crimea in the south, the agency said.

As Ukraine shut its airspace and an Air India flight turned around, the government urged Indians travelling to Kyiv to catch their flights “to return to their respective cities.”

“Dear Indians in Ukraine, the present situation in Ukraine is highly uncertain. Please maintain calm and remain safe wherever you are, be it in your homes, hostels, accommodations or in transit,” said the advisory.

“All those who are traveling to Kyiv, including those traveling from western parts of Kyiv, are advised to return to their respective cities temporarily, especially towards safer places along the western bordering countries.”

Government sources said the priority was the safety and security of Indians, especially students, and alternative evacuation routes are being considered.

“We are closely monitoring the rapidly changing situation. Focus is on safety and security of Indians, particularly students. MEA control room is being expanded and made operational on 24×7 basis,” the sources said.