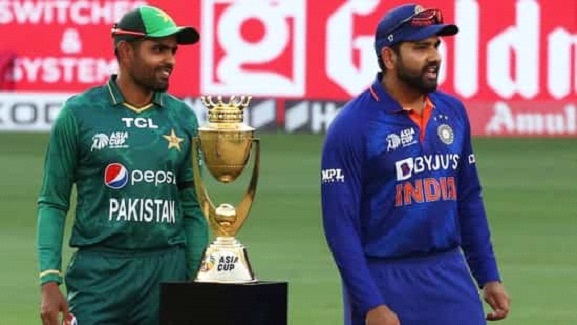 ISLAMABAD : Flagship tournaments are set for a return to Pakistan as the Asian giants will host the forthcoming edition of the Asia Cup in 2023 followed by 2025 ICC Champions Trophy. The 2023 edition of the Asia Cup will mark the return of a major cricketing tournament to Pakistan after over two decades. When it comes to touring Pakistan, the Board of Control for Cricket in India (BCCI) is expected to have reservations due to the political conflict between the two Asian nations.
There is no denying that India versus Pakistan rivalry in cricket is arguably one of the most intense sporting rivalries in the world. The traditional rivals only meet each other in ICC events and the continental tournament – Asia Cup. It has been almost a decade since India and Pakistan played a bilateral series. Former world champions India last visited Pakistan to play the Asia Cup in 2008.
According to a report filed by Cricbuzz, it has been learned that the apex cricket board of India is open to sending the men’s cricket team for the 2023 Asia Cup to Pakistan. A BCCI note was reportedly shared among the state associations in the lead-up to the Annual General Meeting (AGM). As per the note, the Asia Cup 2023 is mentioned as one of the four events in which Team India is expected to participate next year.
Team India will feature in the ICC Women’s T20 World Cup (South Africa), ICC Women’s U-19 T20 World Cup (South Africa), Asia Cup (Pakistan) and the ICC Cricket World Cup. Two-time champions India will host the ICC Cricket World Cup in 2023. “It will be subject to the clearance of the Government of India as always,” a BCCI official was quoted as saying.
It should be noted that BCCI secretary Jay Shah is also the president of the Asian Cricket Council (ACC). Thus, there is always a possibility that the continental tournament is shifted to a neutral venue like the United Arab Emirates (UAE). The previous edition of the Asia Cup was also hosted by UAE. Arch-rivals India and Pakistan will resume their rivalry at the ICC World T20 2022 on October 23.