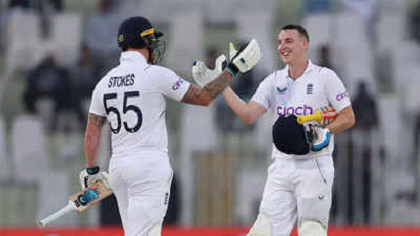 LAHORE : Team England on Thursday rewrote the record books, smashing 506 runs on the opening day of the Rawalpindi Test against Pakistan.

The previous record of most runs on Day 1 of a Test was 494 that was set 112 years ago in December 1910 in the match between Australia and South Africa.

Harry Brook (101*) was the fourth Englishman to score a ton on the opening day of the Rawalpindi Test as the visitors ended the day at 506 for 4, smashing a century old record.

Pakistan bowlers were made to toil hard on the flat Rawalpindi track with leggie Zahid Mahmood giving away most runs — 160 — in his 23 overs for 2 wickets.

At the close of play, England had Brook and Stokes (34) unbeaten at the crease.

More than 500 runs in a day has only been achieved on four other occasions — three times by England and once by Sri Lanka — but never on the opening day of a Test.

In November 2012 another Australia vs South Africa Test match saw 482 being scored on the opening day, which is now the third highest number of runs on Day 1 after England’s feat today.

Overall, 588 are the maximum number of runs scored in a single day of a Test. The England-India Test in Manchester in 1936 saw the hosts pile up record runs on the second day which still stands unbroken.