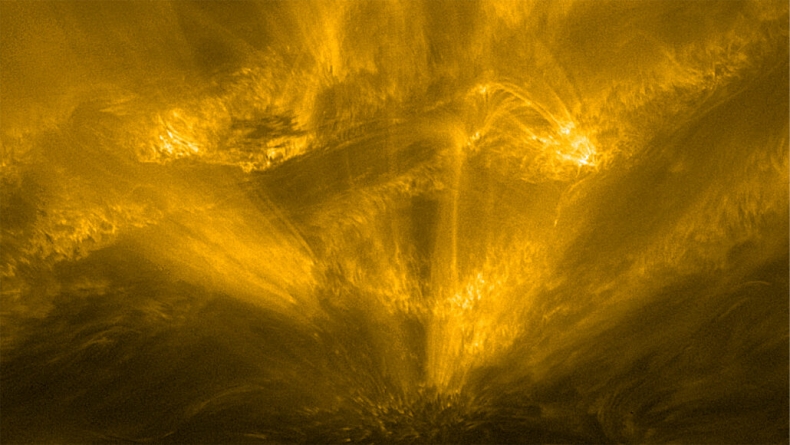 BERLIN: Meet the “hedgehog,” a newly found feature on the sun that appears to radiate spiky jets of cooler gas against a background of hotter plasma. This spiky feature is in the bottom third of the image, below the center.

A spacecraft has spied a spiky “hedgehog” on the sun and watched a solar flare in ways never done before.

The Solar Orbiter, a collaboration between the European Space Agency and NASA, launched in February 2020 and is now looping around our star (SN: 2/9/20). On May 18, researchers released images from the spacecraft’s closest solar flyby yet. That flyby took place March 26 when the orbiter flew within about 48 million kilometers of the sun, closer than Mercury is.

“This is amazing to have this sort of data already,” says solar physicist David Berghmans of the Royal Observatory of Belgium in Brussels.

The observations show a feature nicknamed the hedgehog, due to its spikes of darker, cooler gas atop hotter material. “‘Cool’ is relative here, with respect to the 1-million-degree background [plasma],” says Berghmans, the principal investigator of the orbiter’s Extreme Ultraviolet Imager. The scientists don’t know what causes this feature, but think it’s related to long, thin jets of solar material called spicules

On March 21, the Solar Orbiter detected an X-ray flare (marked in red and blue) at the sun’s edge. The spacecraft’s ultraviolet instrument also captured the shock wave (shown as the green outward-moving material) created by the flare.EUI and STIX teams/Solar Orbiter/ESA and NASA

Several days before spying the 25,000-kilometer-wide hedgehog, four of Solar Orbiter’s instruments detected an X-ray flare and observed how it affected nearby space. This is what the spacecraft was built to do, Berghmans says.

The spacecraft’s focus is “connection science,” he says. Solar Orbiter’s instruments detected the solar flare, the shock wave it created and the produced burst of charged particles and radio signals — one after another — over several hours. Previously, different telescopes would detect these separately over days.

By connecting the sequence of events into “a complete story,” Berghmans says, scientists can better predict the outflows of those charged particles, which are especially dangerous to astronauts, satellites and even high-flying aircraft.

The spacecraft will pass close to the sun roughly every five to six months through 2026. Then, for three more years, the orbiter will swing closer to the sun’s poles, providing scientists with their first head-on views of those regions.