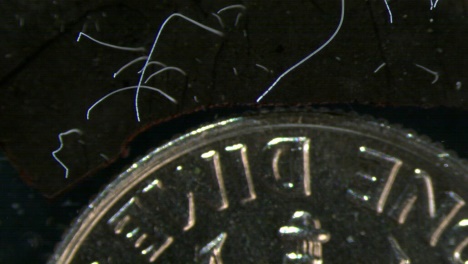 CALIFORNIA: The newfound species, Thiomargarita magnifica, is roughly a centimeter long, and its cells are surprisingly complex, researchers report in the June 24 Science.

The bacterial behemoth is roughly the size and shape of a human eyelash, marine biologist Jean-Marie Volland of the Laboratory for Research in Complex Systems in Menlo Park, Calif., said June 21 at a news conference. Maxing out at approximately 2 centimeters, T. magnifica is about 50 times the size of other giant bacteria and about 5,000 times the size of most other average-size bacterial species.Bottom of Form

What’s more, while the genetic material of most bacteria floats freely inside the cell, T. magnifica packs its DNA inside a sac surrounded by a membrane (SN: 6/22/17). Such a compartment is a hallmark of the larger, more complex cells of eukaryotes, a group of organisms that includes plants and animals.

Study coauthor Oliver Gros, a marine biologist at the Université des Antilles Pointe-á-Pitre in Guadeloupe, France, first discovered T. magnifica while collecting water samples in tropical marine mangrove forests in the Caribbean’s Lesser Antilles. At first, he mistook the long, white filaments as some sort of eukaryote, Gros said at the news conference. But a few years later, genetic analyses showed that the organisms were actually bacteria. A closer look under the microscope revealed the cells’ DNA-containing sacs.

Previous studies had predicted that bacterial cells’ overall lack of complexity meant there was a limit to how large bacteria could grow. But the new discovery is “breaking our way of thinking about bacteria,” says Ferran Garcia-Pichel, a microbiologist at Arizona State University in Tempe who was not involved with the study. When it comes to bacteria, people typically think small and simple. But that mindset may make researchers miss lots of other bacterial species, Garcia-Pichel says. It’s a bit like thinking the largest animal that exists is a small frog but then scientists discover elephants.

It’s still unclear what role T. magnifica plays among the mangroves. Also unknown is why it evolved to be so large. One possibility, Volland said, is that being centimeters long helps cells access both oxygen and sulfide, which the bacteria need to survive.