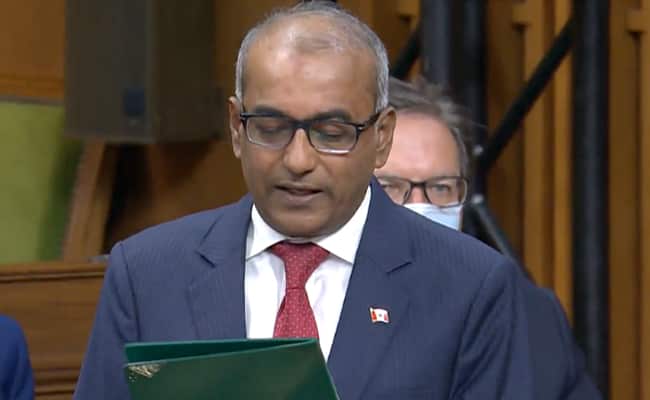 TORONTO: Chandra Arya, an Indian-born Canadian lawmaker, spoke in his mother tongue Kannada in the Canadian Parliament on Thursday and said that it’s the first time the language was spoken in any parliament in the world outside India. A video of his address has gone viral.

Mr Arya, who represents the electoral district of Nepean, Ontario, in the House of Commons, the lower house of Canada, tweeted a video of his address, saying Kannada is a beautiful language spoken by about five crore people.

“I spoke in my mother tongue (first language) Kannada in the Canadian parliament. This beautiful language has a long history and is spoken by about 50 million people. This is the first time Kannada is spoken in any parliament in the world outside of India,” said Mr Arya.

“I am happy that i have got the opportunity to speak in my mother tongue Kannada. It is a matter of pride for 5 crore Kannadigas that someone who comes from Sira Taluka in Tumukuru district is speaking in Kannada after getting elected to the Canadian Parliament,” he said in Kannada. His colleagues in the house greeted him with a big round of applause once he finished.

Mr Arya is from Tumkur district, about 70 kilometres from Karnataka capital Bengaluru. He was elected to the parliament as a Liberal party candidate in the 2019 general election.

After finishing his master’s degree in Business Administration from Dharwad in Karnataka, Mr Arya worked in the high-technology sector.

Several people have praised Mr Arya for speaking in his mother tongue in the Canadian parliament.

“Beautiful, this inspires me to learn Kannada,” said one user.

“This is how you wear your cultural and linguistic legacy upon your sleeve. Also, it is the beauty of Canada which not tolerates but accepts such diversity,” said another user.

“I feel proud even if I don’t understand Kannada because it’s the language of our land. I thought he was speaking in Sanskrit,” said a third user.

Mr Arya has held the vice presidency of the Ottawa Community Immigrants Services Organization. He is now the Chair of the Indo-Canada Ottawa Business Chamber.