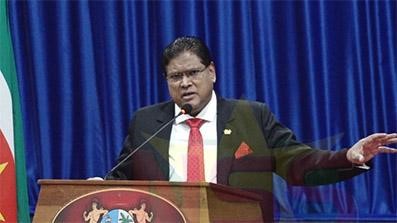 PARAMARIBO: President Chan Santokhi says there is an absolute shortage
of US dollars. According to him there are five reasons for this. From January,
exporters will have to bring their dollars to Suriname and exchange 30% of this
at the official rate of SRD 14.29. The Central Bank of Suriname (CBvS) must act
in the event of even open price increases. The president discussed the five
causes during a press conference on Monday.

At the moment there is an enormous
shortage of US dollars because the exports of euros via the Netherlands have
not taken place for almost two years. The import of dollars from the US has
also stopped.

The solution, according to the
president, is that the euros should leave the country and the dollars should
take their place. There have been good discussions about this with the governor
of the CBvS. Before that, there was also a discussion with the Netherlands
about it. The dollars have also been discussed with the US via FED. This issue
must also be addressed and implemented by the governor of the CBvS. There are
bright spots in both of the cases, Santokhi said.