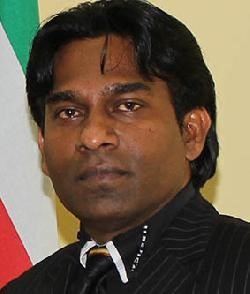 PARAMARIBO:
Judge
Iwan Rasoelbaks has served in this position from 2014, but has not been
appointed as president. Later in the day, Rasoelbaks are sworn in as president
and eleven judges as members and alternates respectively.

Rasoelbaks was unanimously nominated
as president at a meeting of the court. The installation by the Court of
Justice will take place in an extraordinary public session on December 23 in
the Congress Hall. Six new judges (members deputies) will be added. These are:
S. Punwasi, D. Haakmat-Sniphout, A. Eagle, S. Bikhari, R. Elgin and D. Bandhoe.
The following are appointed members of the court: S. Bradley, J. Jensen, S.
Nanhoe-Gangadin, I. Sonai, and A. Johanns.