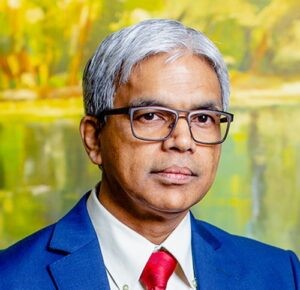 PARAMARIBO: With the aim of cutting the
costs on a state-of-the-art shore base facility, the acting Chief Executive
Officer (CEO) and Managing Director of Suriname’s Staatsolie, Annand Jagesar,
says that Guyana and Suriname should partner on this project.

Jagesar
made this call during his presentation at the Guyana Basins Summit – a virtual
three-day Oil and Gas conference. This conference, which concluded yesterday,
was aimed at delivering networking opportunities and valuable insight into the
region’s potential, along with its challenges and the road ahead.

The
acting CEO indicated to listeners that the shore base is very important, and
implored President, Irfaan Ali, to hold a discussion on this project with the
Surinamese government.
In highlighting one of the needs for the partnership on this project, Jagesar
explained, “This is the problem with Suriname and Guyana, we have all these mud
banks that come out of the Amazon river, and just to reach water depths of ten
meters or more, you have to go about 30-40 to even 60 meters out of the coastal
areas.”

Due to
this, it makes it very expensive to construct a shore base, Jagesar said, and
if Guyana and Suriname work together on it, both countries would split the
costs by two.
“We’re really looking forward to talking about this in the future,” the acting
CEO said, “This is also an opportunity for interested parties to look at the
shore base development and the most likeable is that we do it together with
Guyana.”

Jagesar’s
comments come on the heels of Staatsolie’s former CEO, Rudolf Elias, who had
first called for Guyana and Suriname to partner on establishing a shore base.
Elias, during a January interview with Kaieteur Radio, had warned that if the
two neighbouring countries fail in building these shore bases together, then it
would lose local content to countries like Trinidad and the United States.

Notably,
Guyana’s Shore Base Inc. (GYSBI) located at Houston is unable to handle the
Liza One demands. The former Minister of Natural Resources, Raphael Trotman,
had revealed this in 2018, in a parliamentary sectorial committee.

He had
said to that committee in 2018, “What we have at Muneshwers Limited, now, which
is already causing major traffic accidents and traffic jams every day, is only
to service the Liza One field. The Liza One field has approximately 1.8 billion
barrels of oil because it is going to be tied with another field, Payara. We
are still talking about another two to three billion barrels of oil that would
have to be developed.”