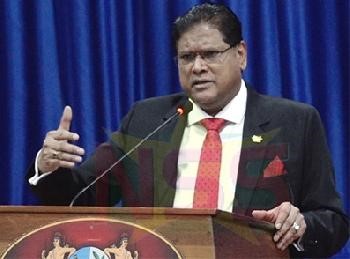 PARAMARIBO: Financially, we expect a breakthrough in early 2021,
”announced President Chan Santokhi. “There will be points of light in the
month of February.” Santokhi explained at a government press conference
that the financial prospects for 2021 look good. The nine-month “urgency phase”
is on track. The “stabilization phase” starts in April. In February, the first
“financial injections” should be a fact with which to manage the crisis and
start various projects.

Suriname has a debt of US $ 4 billion at home and abroad. The country has hardly
any income. The income from Newmont, Iamgold and Staatsolie has been pledged by
the previous government as collateral for loans. Talks are held with the
creditors to pay off the debts in a different way. At the same time, they are
looking for cheap capital, loans with a low interest rate, in order to make
investments. Ways are also sought to buy off the largest debts in one go.

“I’m mentioning February but it has nothing to do with enthusiasm or creating
hope, I’m just looking at the timeline we’ve set,” notes Santokhi. He
emphasizes that the recovery program is on track. In the ‘urgency phase’, the
most pressing issues, such as realigning the government’s financial household,
rescheduling the massive debt, boosting the country’s image, restarting or deepening
foreign relations, strengthen the institutions and control. of the exchange
rates. This phase will end in March. Then the stabilization phase will begin,
in which, among other things, our own production will be stimulated and the
price will be made even more stable.