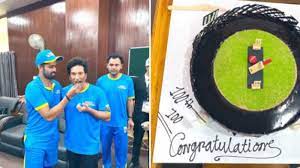 MUMBAI: Sachin Tendulkar had become the
first cricketer and till date the only one to register a 100 international
centuries on March 16, 2012 against Bangladesh in an Asia Cup match.

Sachin
Tendulkar had become the first cricketer and till date the only one to register
a 100 international centuries on March 16, 2012 against Bangladesh in an Asia
Cup match.

“I had
the best seat in the house when @sachin_rt paaji scored 100th International and
today as well:),” tweeted Irfan Pathan, who was at the non-striker’s end when
Sachin reached the milestone.

“The date
is same, year is different but, the celebration will never change,” wrote Vinay
Kumar.

Sent in
to bat first, India had witnessed a bad start as the side lost opener Gautam
Gambhir pretty early in the innings. However, Tendulkar found support in Virat
Kohli and the duo formed a 113-run stand. After Kohli’s dismissal, Suresh Raina
came out in the middle.

Continuing
his brilliant form, Tendulkar brought up his 100th ton in the 44th over of the
innings. The Master Blaster went on to play a knock of 114 runs from 147 balls and
took India’s total to 289/5 in the allotted fifty overs. However, Bangladesh
managed to chase down India’s total in the final over of the innings to
register a victory by five wickets.

Last
week, Tendulkar and Yuvraj Singh turned back the clock and took Raipur by storm
in their inimitable style as India Legends registered a thumping 57-run win
over South Africa in Road Safety World Series T20. With this win, India Legends
also qualified for the semi-final of the event.