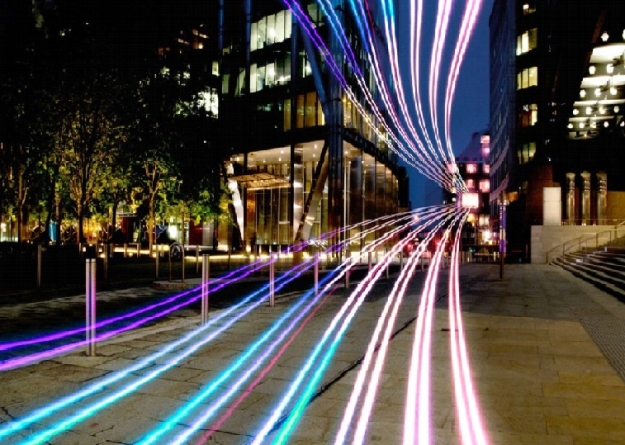 LONDON: Government subsidies and pandemic-era telecommuting have quietly fueled the growth of broadband fiber networks, propelling the fast connection technology from an exotic, expensive technology niche to the mainstream.
In the US, the Rural Digital Opportunity Fund and Broadband Equity, Access and Deployment programs encouraged internet service providers to bring higher-speed access to places that previously wouldn’t have been profitable to serve. Government support also has helped improve broadband in Sweden, Lithuania, Italy and other European nations.
A global pandemic, which turned our homes into offices and schoolrooms, also encouraged the upgrade to faster broadband. Work video conferences and Zoom school lessons demanded more data — often at the same time — than we had previously needed. An explosion in the use of  streaming video services like Netflix, HBO Max, Apple TV Plus and Disney Plus added to the demand for fiber at home.
Fiber broadband now has reached a tipping point, passing both cable and DSL in the 38 member countries of the Organization for Economic Cooperation and Development, a club of relatively rich countries. Fiber accounted for 35% of subscriptions compared with 32% for cable and 27% for DSL in 2021, according to OECD data released in July. From 2020 to 2021, fiber broadband subscriptions surged 40%.
The rapid embrace of fiber comes as our homes become more connected. A decade ago, a household might have had a few laptops and a couple smartphones connected to a local network. But an explosion of streaming services, tablets and smart home devices has created a need for fat data pipes, like those fiber offer, that was out of reach for most people until recently.
“It’s becoming the new normal,” said Jeff Heynen, a broadband analyst at the Dell’Oro Group.

Broadband delivered by fiber optic lines has surpassed older cable and DSL network technology using copper cables in the 38 relatively wealthy nations tracked by the OECD.
Data from OECD; graph by Stephen Shankland/CNET
When the broadband revolution began in the 1990s, phone companies upgraded their decades-old copper wires to DSL service, while cable companies started using their coaxial cables to deliver data alongside TV shows. The fastest DSL download speeds rarely surpass a few tens of megabits per second, however, and cable usually is in the range of 25 to a few hundred megabits per second. By contrast, fiber broadband easily reaches 1 gigabit per second for downloads and, in sharp contrast to cable and DSL, uploads that are just as fast.
Longer term broadband benefits
Fiber’s leap in speed may be difficult to discern if you’re upgrading from a reasonably good cable internet service. Most services and websites don’t supply data at gigabit speeds.
And a network, no matter how fast, won’t help people who can’t access it. Fiber broadband does little to address the digital divide, particularly given that programs to bring broadband to lower income families are expiring. Fiber broadband is a premium option. Even where it’s available, it isn’t always affordable.
As with 5G mobile networks, however, the full impact of the improvements may come over time. Better speeds and lower communication delays pave the way for the more deeply digital lives we’ll soon be living. Networked devices, streaming video, remote work, smart homes and software updates for our cars all add up to a need for more network capacity.
On Wednesday, Google Fiber staked its place in the fiber broadband market, expanding to five new states after a five-year hiatus. The company helped kick off the gigabit fiber revolution, though other companies, such as AT&T Fiber, Ting and Sonic, are now carrying the mantle.
Mark Strama, a former Texas state representative who runs Google Fiber’s expansion efforts, said demand for the company’s gigabit service forced it to move more deliberately. Google Fiber had a backlog of customers trying to get onto the service in the 15 cities it already operated that had to be addressed first.
Google Fiber, which hasn’t participated in any government subsidy programs, has benefited from faster, cheaper fiber installation methods, Strama said. About eight years ago, the company began using “micro trenching,” a technique that buries fiber optic cable at 6 inches, rather than the previous standard of 3 feet. Now, Google Fiber can reach 500 new homes in a weekend, Strama said.
Dumping DSL
Heynen, the analyst, said many customers ditched DSL for cable or fiber as the pandemic revealed the technology’s shortcomings. Now, as we become a culture of YouTubers and TikTokers, upload speed will drive demand for fiber networks, he said.
Fiber’s “symmetric” data rates are also important for appearing in videoconferences, he added. The physics of transmitting data over fiber optic strands instead of electrical signals over copper wires does away with many of the limits that have bogged down internet service providers.
“With fiber, the only limitations on speed are the electronics on either end of the connection,” Heynen said. “It’s a real sea change.”