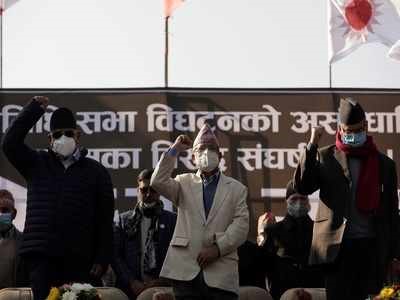 KATHMANDU:
Chairman of the ruling Nepal Communist Party’s rival faction Madhav Kumar Nepal
said on Tuesday that the party could still be united if Prime Minister K P
Sharma Oli was willing to accept his mistakes, as thousands of protesters
marched through the streets of Kathmandu against the dissolution of Parliament.

Madhav Nepal made the comments while addressing a massive protest rally
organised by his faction in Kathmandu, which was attended by former prime
ministers Pushpa Kamal Dahal ‘Prachanda’ and Jhala Nath Khanal.

“We are ready to forget everything if Oli accepts his mistakes,” Madhav Nepal,
the former prime minister who has replaced Oli as chairman of the Prachanda-led
faction, told the rally.

He also accused Prime Minister Oli of practicing anti-democratic activities by
making decisions against the Constitution and the general public.

“All the political parties, intellectuals, teachers, students and public are on
the streets against the unconstitutional move of the Oli-led government. The
lower house will soon be revived,” Madhav Nepal was quoted as saying by My
Republica newspaper.

Nepal plunged into a political crisis on December 20 after Prime Minister Oli,
known for his pro-Beijing leanings, in a surprise move, recommended dissolving
the 275-member House, amidst a tussle for power with Prachanda.

Acting on the prime minister’s recommendation, President Bidya Devi Bhandari
dissolved the House the same day and announced fresh elections on April 30 and
May 10, sparking protests from a large section of the NCP led by Prachanda,
also a co-chair of the ruling party.

Addressing the rally, Prachanda said that Prime Minister Oli’s recent move to
dissolve the House of Representatives is aimed at killing federalism and
republicanism which were achieved after decades of struggle by the people.

“The act of dissolving parliament is totally unconstitutional. It has
taken the country toward another round of political instability.

“We did not even imagine that we would be forced to take to the streets
against Oli’s regressive move. Now, we have to fight collectively against this
move,” said Prachanda, who claims control over the ruling party after
removing Prime Minister KP Sharma Oli from the posts of the party’s
parliamentary leader and chair.

“People had given us (the NCP) the mandate to ensure political stability
with social justice so that we could move toward achieving a socialism-oriented
system,” he said, adding that unfortunately, Oli’s abrupt decision to dissolve
parliament without holding any discussion in the party has only invited
political chaos.

Prachanda said that Oli has attacked the Constitution and republicanism that
were achieved after a great struggle.

“I had personally taken initiatives for a merger between the two Communist
parties and approached Oli for the same. At that time, he agreed to accept
federalism, secularism and republicanism although I was well aware of his
political ideology and the fact that he was against federalism and
republicanism… he started to work against the spirit, ideology, principle and
norms of a communist party,” he said.

Prachanda said that Oli eventually turned autocratic, imposed hegemony in the
party and even did not bother to consult other leaders before blatantly
dissolving Parliament.

“Oli’s tyranny will not last long because the people will firmly protest
against his recent political move,” he said.

Prachanda said it was not Parliament but the Oli-led government that had
actually been dissolved for its wrong political move.

He expressed hope that Parliament will be reinstated through the Supreme
Court’s verdict.

“I have faith in the court. I hope that the Supreme Court will honour the
emotions of the people. I cannot even imagine that the apex court will go
against the wish of the people,” he said.

Nepal’s Supreme Court on Friday issued a show-cause notice to the Oli-led
government, asking it to submit a written clarification over its decision to
abruptly dissolve Parliament.

The five-member Constitutional bench headed by Chief Justice Cholendra Shumsher
Rana asked the government to submit an original copy of the recommendations
made by it to dissolve the House and the decision made by the President to
authenticate the government’s recommendations within 10 days.

Prachanda, meanwhile, also accused Oli of having made several efforts time and
again to split the NCP but had failed in the past one year even as the country
was battling the COVID-19 pandemic.

The agitation will not stop unless the regressive move taken by Oli is
neutralised, he added.
The Prachanda-led faction organised protest rallies at various places,
including Koteshwor, Lagankhel, Tripureshwor, Maitighar, Thamel, Chabahil,
Teku, New Baneshwor, Kupandol, Lainchaur, Naxal, Bagbazar and Ratnapark. On
Monday, thousands of the Nepali Congress supporters held demonstrators in all
the 165 constituencies represented in the House to protest Prime Minister Oli’s
move to dissolve the parliament.