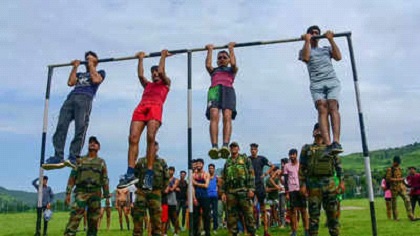 KATHMANDU : India’s Agnipath armed forces recruitment scheme seems to have run into serious turbulence in Nepal with its government yet to approve enlisting of the country’s youth under the same. In line with the 1947 tripartite India-Nepal-UK agreement, India recruits Nepali soldiers for its Gorkha Regiments with equal benefits and pension facilities.

While Indian foreign ministry spokesperson Arindam Bagchi said on Thursday that India is looking forward to recruiting Gorkha soldiers under the Agnipath scheme, Nepal foreign minister Narayan Khadka was reported to have asked Indian ambassador Naveen Srivastava to “postpone” recruitment of Nepali youth. The Indian side was ready to start recruitment on August 25 but that process will now have to wait.

While a Gorkha soldier usually serves for close to 17-18 years in the Indian Army, making him eligible for pension, the fact that many of these soldiers will now have to return to Nepal only after four years of service has caused serious concerns in Nepal with local authorities claiming the scheme is a violation of the tripartite agreement.

According to sources, Nepal had raised this issue with both the MEA and also Indian Army seeking “clarifications” on how the scheme, which led to massive protests even in India, will be implemented. These concerns will likely be amplified by Nepal authorities ahead of Indian Army chief Manoj Pande’s visit to Nepal early next month. Nepal was apparently not consulted by Indian authorities before the scheme was announced.
According to Nepal authorities, and as per the tripartite agreement, all recruits must be allowed to serve for long enough to qualify for pension “subject to satisfactory performance and conduct’’.

According to the Agnipath scheme only 25% of each batch of those recruited, or Agniveers, will be enrolled in the regular cadre of the armed forces “based on objective criteria including performance during their four-year engagement period”.

Interestingly, the tripartite agreement itself has come under strain in recent times with senior Nepal leaders, like former foreign minister Pradeep Gyawali saying it may not be appropriate for a sovereign country to send its people to fight for the army of another sovereign country. The Nepal government under former Prime Minister K P Oli had also called upon the UK to review the treaty.