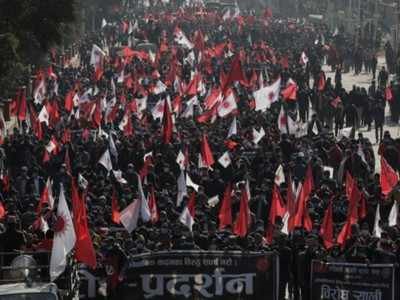 The meeting between the four-member delegation led by Guo, the Vice Minister of
the International Department of the CPC, and former Prime Minister Deuba also
focused on relations between Nepal and China, The Kathmandu Post quoted shadow
foreign minister Narayan Khadka as saying.

They discussed the latest political developments in Kathmandu, the paper said.

Guo conveyed an invitation to Deuba from Chinese President Xi Jinping to visit
China on the 100th anniversary of the CPC next year, said Dinesh Bhattarai,
former foreign relations adviser to Deuba when he was prime minister.

On his part, Deuba congratulated President Xi, the CPC and the people of China
on the occasion, said Bhattarai. The CPC will organise a grand function to mark
the occasion in Beijing next year.

They discussed matters of bilateral interest and concern, said Bhattarai. Both
Khadka and Bhattarai were present during the meeting between the Chinese
delegation and Deuba.

Guo also lauded the contribution made by Nepali Congress’ founding president
and the first elected prime minister B P Koirala in improving relations between
the two countries.

Deuba said that the friendship between the NC and the CPC goes back decades and
nurtured since the premiership of Koirala.

In 1960, when Koirala was the prime minister, Nepal and China signed a peace
and friendship treaty, the first boundary protocol, resolved the dispute over
Mount Everest and gave a new direction to the Nepal-China ties, Bhattarai said.

Besides assessing the ground situation, the Chinese side also discussed
possible political ramifications of house dissolution, whether it will have an
impact on stability and development of Nepal, status of Nepal-China ties,
progress made in China-funded projects, implementation of past accords and
agreements among others, according to leaders who met the CPC delegation.

Nepal plunged into a political crisis on December 20 after Prime Minister Oli,
known for his pro-Beijing leanings, in a surprise move, recommended dissolving
the 275-member House, amidst a tussle for power with Prachanda.

Acting on the prime minister’s recommendation, President Bhandari dissolved the
House the same day and announced fresh elections on April 30 and May 10,
sparking protests from a large section of the NCP led by Prachanda, also a
co-chair of the ruling party.

A wary China rushed Vice Minister Guo to Kathmandu after its high-profile
ambassador to Nepal Hou Yanqi failed to sort out differences between Oli and
Prachanda.
China is not happy with the split in the largest communist party of Nepal,
according to sources.

Guo is trying to patch up differences between the two warring factions of the
ruling party – one led by Oli and the other led by Prachanda – during his four
day stay in Nepal, the media reports said.

Earlier, Gou travelled to Kathmandu in February 2018 when Oli-led CPN-UML and
Prachanda-led NCP (Maoist Centre) – were all set to merge and form a unified
communist party following victory of their alliance in the 2017 general
elections. Later in May, 2018, the two communist parties merged and formed a
new party named NCP.

Guo is assessing the situation of the ruling party and encouraging both
factions of the NCP to seek some kind of common ground for party unity.
This is not the first time that China has intervened in Nepal’s internal
affairs.

In May and July, Hou held separate meetings with the president, the prime
minister and other senior NCP leaders, including Prachanda, when Oli was facing
mounting pressure to step down.

A number of political party leaders had termed the Chinese envoy’s series of
meetings with the ruling party leaders as interference in Nepal’s internal
political affairs.

China’s political profile in Nepal has been on the rise in recent years with
billions of dollars of investments under its multi-billion-dollar Belt and Road
Initiative, including the Trans-Himalayan Multi-Dimensional Connectivity
Network.

Besides the investments, China’s ambassador to Nepal Hou has made open efforts
to garner support for Oli. The CPC and NCP were regularly engaged in training
programmes. In September last year, the NCP had even organised a symposium,
inviting some CPC leaders to Kathmandu to impart training to Nepali leaders on
the Xi Jinping thought ahead of the visit of the Chinese president, his first
to Nepal, according to a Kathmandu Post report.