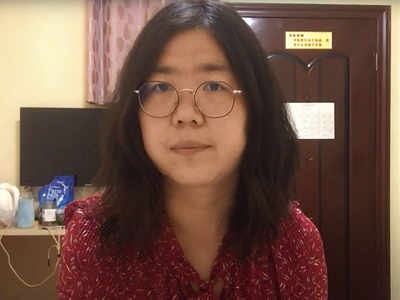 BEIJING: A Chinese court sentenced citizen journalist Zhang Zhan for four years for “picking quarrels and provoking trouble” during her reporting in the chaotic initial stages of the Wuhan outbreak in China.

Who is Zhang Zhan?
Zhang Zhan,37, a former lawyer, was one of the few Chinese people who reported on the virus and brought out the real condition and suffering of the people as opposed to the largely “all is in control” narrative of Beijing.

Why was she sentenced?
“I don’t understand. All she did was say a few true words, and for that she got four years,” said Shao Wenxia, Zhang’s mother, who attended the trial with her husband.
The court said Zhang Zhan had spread “false remarks” online, according to one of her lawyers Zhang Keke, but the prosecution did not fully divulge its evidence in court.

Zhang started reporting from Wuhan in February, questioning the lockdown of the city, access to virus testing and hospital capacity.

Her videos also captured the aggression of Chinese authorities when confronted by a woman filming on her smartphone.

Her videos and social media posts – many on Twitter and YouTube, platforms blocked in China — suddenly ended when she was detained by authorities in May.

Hunger strike and silent protest
She has also been on a hunger strike in protest against her arrest, which has ravaged her health since her detention.

She appeared in wheelchair in her trial as a result of her hunger strike and has been force-fed by the authorities via a nasal tube.

Her legal team said her health was in decline and she suffered from headaches, dizziness and stomach pain.

Zhang spoke little during the trial, an act of protest, her lawyers said, against the legal process and China’s restrictions on free speech.

She even refused to confirm her identity to the judge during the trial in court.

Her lawyer told AFP: “When he asked why, she replied, ‘If you think I’m fabricating lies, then when I reply to your questions does that not count as fabricating lies too?”

The sentencing comes just weeks before an international team of World Health Organization experts is expected to arrive in China to investigate the origins of Covid-19.

Is she the only one?
China’s clampdown on journalists challenging its coronavirus narrative has been going on but Zhang remains the first of the four citizen journalists to face trial and get sentenced.Other citizen-journalists, who reported on the coronavirus crisis in China have disappeared without explanation. They include Fang Bin, Chen Qiushi and Li Zehua.

While there has been no news of Fang, Li re-emerged in a YouTube video in April to say he was forcibly quarantined, while Chen, although released, is under surveillance and has not spoken publicly, a friend has said.