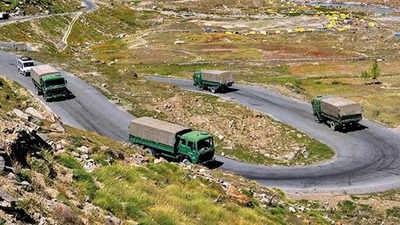 BEIJING : Indian and Chinese troops on Thursday kicked off disengagement from Patrolling Point-15 in the larger Gogra-Hot Springs area of eastern Ladakh, though there is still no progress in the much bigger face-offs at Demchok and the strategically-located Depsang Plains in the continuing 28-month long military confrontation in the high-altitude region.

The breakthrough at PP-15 located near the Kugrang Nallah after over an year of negotiations, while a “low hanging fruit” compared to Depsang and Demchok, could well set the stage for a bilateral meeting between PM Narendra Modi and Chinese President Xi Jingping on the side-lines of the Shanghai Cooperation Organization summit at Samarkhand in Uzbekistan on September 15-16. Both countries have neither confirmed nor denied a bilateral meeting yet. 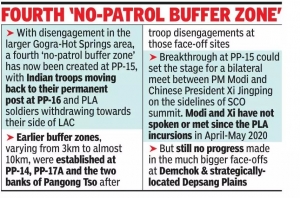 PM Modi and President Xi have not spoken or met since the People’s Liberation Army made multiple incursions in a well-planned manner into eastern Ladakh in April-May 2020, which has led both armies to continue forward deployment of over 50,000 troops each along with heavy weaponry along the frontier.

A brief Indian Army statement on Thursday said, “According to the consensus reached in the 16th round of corps commander-level meeting, the Indian and Chinese troops in the area of Gogra-Hot Springs (PP-15) have begun to disengage in a coordinated and planned way, which is conducive to the peace and tranquillity in the border areas.”

During the 16th round on July 17, India and China had exchanged proposals on completing the stalled troop disengagement at PP-15, where just 40-50 soldiers from the two sides were at the actual face-off site, though there are many more in the immediate depth areas, as was then reported by TOI.
“The modalities and sequencing of the PP-15 disengagement have now been worked out, leading to the mutual withdrawal from the face-off site on Thursday. It’s a positive step with both sides agreeing to respect each other’s claims in the Gogra-Hot Springs area,” an official said.

So, in effect, a fourth “no-patrol buffer zone” has now been created at PP-15, with Indian troops moving back to their permanent post at PP-16 and PLA soldiers withdrawing towards their side of the Line of Actual Control.

The earlier buffer zones, varying from 3-km to almost 10-km, were established at PP-14, PP-17A and the two banks of Pangong Tso after troop disengagements at those face-off sites. The disengagement in the Pangong Tso-Kailash Range region took place in February 2021 and at PP-17A near the crucial Gogra post in early-August that year. There are, however, major concerns that these buffer zones have largely come up in what India claims to be its territory, as was reported earlier by TOI.

The big problem for India remains the major encroachment by the PLA in the Depsang Bulge, a table-top plateau located at an altitude of 16,000-feet towards the crucial Daulat Beg Oldie (DBO) and Karakoram Pass in the north.

The PLA has been actively blocking Indian soldiers in Depsang, around 18-km inside what India considers its own territory, from even going to their traditional PPs-10, 11, 12, 12A and 13 in the area since April-May 2020.

The general assessment is the Depsang imbroglio can be resolved only through top political intervention, while the pitching of additional Chinese tents on the Indian side near the Charding Ninglung Nallah (CNN) track junction at Demchok is not too intractable for it to be defused.

Since mid-June, Chinese fighter jets have also shown “provocative behaviour” by flying close to the Line of Actual Control, often violating the 10-km no-fly zone CBM there, as was earlier reported by TOI.

India has made it repeatedly clear that unless the sequential process of troop disengagement, de-escalation and de-induction to defuse the border crisis is undertaken, there will be no improvement in the overall bilateral relations with China.