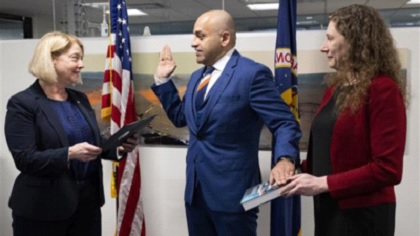 WASHINGTON : The National Aeronautics and Space Administration (Nasa) has appointed an Indian-American as its chief technologist, a role that involves serving as principal advisor to the space agency’s administrator, Bill Nelson, on technology policy and programmes.
AC Charania, an aerospace industry expert, joined Nasa in his new role on January 3.

All you need to know about A C Charania:

⦁ Prior to joining Nasa, Charania served as vice president of product strategy at Reliable Robotics, a firm that works to bring certified autonomous vehicles to commercial aviation.
⦁ His previous experience also includes working at Blue Origin to mature its lunar permanence strategy, Blue Moon lunar lander program, and multiple technology initiatives with Nasa.
⦁ Charania has also worked in strategy and business development for the Virgin Galactic (now Virgin Orbit) LauncherOne small satellite launch vehicle programme.
⦁ He also served in multiple management and technology roles at SpaceWorks Enterprises, including helping to incubate two startups, Generation Orbit and Terminal Velocity Aerospace.
⦁ Charania led the formation of the FastForward industry group focused on high-speed point-to-point transportation, was a Nasa Innovative Advanced Concepts fellow, and served on the Lunar Exploration Analysis Group Commercial Advisory Board, according to the release.
⦁ He received a bachelor’s and a master’s degree in aerospace engineering from the Georgia Institute of Technology, and a bachelor’s in economics from Emory University.
He replaces another Indian-American scientist Bhavya Lal, who served as acting chief technologist prior to Charania’s appointment.

The chief technologist will align Nasa’s agency-wide technology investments with mission needs across six mission directorates and oversee technology collaboration with other federal agencies, the private sector, and external stakeholders, Nasa said in a statement.
The position works within Nasa’s Office for Technology, Policy, and Strategy.

“The rate of advancement we seek in the 21st century is dependent upon selecting and maturing a portfolio of technologies into systems to execute our missions,” Charania said, adding: “With this in mind, there are incredible opportunities in partnerships within and outside of Nasa. I now look forward to the opportunity to work with the entire community to increase the rate of space and aviation progress.”