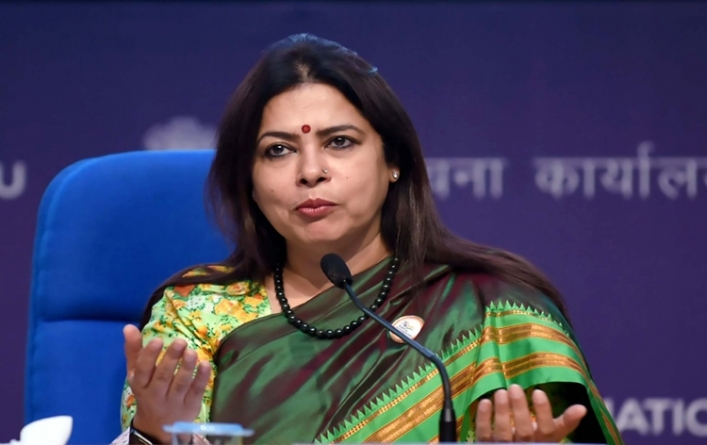 During her visit to Norway, MoS called on Ms. Anniken Huitfeldt, Minister of Foreign Affairs and met Mr. Tore Hattrem, Secretary General, as well as Mr. Erling Rimestad, State Secretary in the Ministry of Foreign Affairs of Norway. During these meetings, cooperation in trade & investment, blue economy, energy, the Arctic region, cultural and people to people ties were discussed. Regional and global issues of mutual interest were also discussed.

On 17 August, MoS participated in a panel discussion on India-Norway Green Energy Cooperation, together with Mr. Espen Barth Eide, Minister of Climate and Environment. MoS highlighted the significant progress made by India in achieving climate action targets, during this interaction.

MoS interacted with the members of the Sikh Community during her visit to Gurdwara Sri Guru Nanak Dev Ji (the first Gurdwara in Norway). She also interacted with around 150 prominent members of the vibrant Indian Diaspora at a community event. The participants comprised scientists, IT professionals, businessmen, youth and students. In addition, MoS participated in a Yoga event and planted a tree in the historical Botanical Gardens.

MoS witnessed the signing of an MoU between RetinaRisk, a local HealthTech company and Sankara Nethralaya, in the field of predictive eye screening for diabetics.

MoS addressed the University of Iceland on the topic “India’s Role in a Changing World – India@75”. A large number of students, faculty, researchers and resident diplomats were present on the occasion. She also participated at a Yoga event, Janmashtami celebrations and planted a tree sapling at the premises of the Indian Embassy. She also attended a cultural event in Harpa Concert Hall, where a large number of Indian community members were present. The event was graced by the Minister of Culture and Business Affairs.

During her visit to Malta (21-23 August), MoS called on the President of Malta Dr. George Vella and met Dr. Ian Borg Foreign Minister, Mr. Clayton Bartolo, Minister of Tourism and Dr. Owen Bonnici, Minister for National Heritage, Arts and Local Government. Both sides had detailed discussions on bilateral relations, especially trade & investment, maritime cooperation, solar energy, films, tourism and culture. The Maltese side appreciated the contribution of the 112 Indian companies present in Malta, mainly in the pharmaceuticals and ICT sectors. Health and fintech sectors were identified as areas for future cooperation. Both sides also exchanged views on regional and global issues of mutual interest.

MoS also had an interaction with the Director and Board Members of Mediterranean Academy of Diplomatic Studies which has an MoU with Sushma Swaraj Institute of Foreign Service and discussed ways to enhance cooperation between the diplomatic institutes of the two countries.

At the invitation of the Foreign Minister, MoS participated in the Dingli Festival, as well as a Community event where she interacted with the members of the Indian Diaspora. She also participated in a Yoga event and planted a tree sapling in the Buskett Woodlands in Malta.