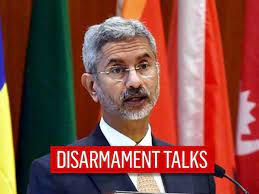 The two sides discussed developments in disarmament and non-proliferation relating to nuclear, chemical and biological domains, outer space issues, conventional weapons and strategic export controls. The consultations are part of dialogue mechanisms under the Roadmap to 2025 for further strengthening the India-EU Strategic Partnership.