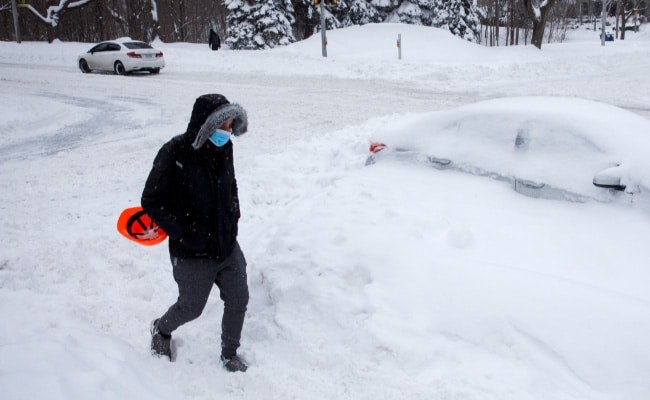 TORONTO: Lack of quality job opportunities is driving residents of this village in Gujarat to pursue their dream of migrating to the US and other developed countries for a better future and that urge is so strong that some of them do not mind taking the illegal route and endangering their lives in pursuit of their goal.

Dingucha village in Gandhinagar district is under international spotlight after a family of four – a couple and their two children – froze to death in Canada while allegedly attempting to cross over illegally to the US. It is believed the family belonged from this village though there has been no conformation of this yet.

A large number of people from Dingucha are settled abroad, mainly in the US, Canada and Australia and they have generously donated money for construction of the panchayat building, a school, temple, health centre and a community hall, among others, in the village, said local residents.

Many more keep looking for an opportunity to move abroad in search of better opportunities, they said.

On entering Dingucha, one gets the feeling of being in a town and not a village.

A wall painting advertisement right across the panchayat building at Dingucha promises enrolment to a university in the UK or Canada “with or without IELTS” — the English proficiency test required for admission to universities in these countries.

A few other hoardings about “study in Canada and US” in the village, located some 40km from Ahmedabad, target the youth in the village who always dream of moving abroad in search of better opportunities.

It is the lack of opportunities here that is driving people to go abroad, said Amrut Patel, a man in his late 60s who had himself migrated to the US 33 years ago before taking his family there.

“Not just Dingucha, I’d talk about the entire Gujarat. People are not getting salary befitting their education, so they think, why not go abroad and earn more?” said Mr Patel, who runs a restaurant near Baltimore in the US with his son. His three daughters are also married there.

As per the locals, a married couple and their two children from the village, who had recently left for Canada on a visitor’s visa, have gone missing.

Villagers apprehend they might be the same family who froze to death while trying to illegally enter the US through Canada, especially since there is no official confirmation yet on their identities.

“People are looking for opportunities in the US or Canada, because there is a lack of opportunity here… Since not everybody can go abroad legally, they are looking for ways to enter illegally – something that this ill-fated couple (who were found dead) were doing with their children,” said Mr Patel, who visits his native village for a few months every year.

For one to migrate to the US or Canada illegally, all one needs is a strong connection among the NRI (Non-Resident Indian) community, Mr Patel said.

“You do not need to be affluent to go abroad. In fact, affluent people do not need to go abroad in search of opportunities, taking so much risk. If you are financially weak, relatives and friends who are settled there will help with money. They can provide lakhs of rupees to facilitate your journey,” he said.

Ever since the news report reached here last week of the bodies of four members of a family found frozen on the US-Canada border, the village has been rife with a sense of foreboding.

Jagdish Patel, his wife and their two children, who are missing, belong to an average middle-class family of farmers with a limited landholding, and they had recently left for Canada on a visitor’s visa, said village talathi (revenue official) Jayesh Chaudhary.

“Jagdish Patel is a native of Dingucha. His parents lived in the village, while he resided in the nearby town of Kalol. Some two years ago, during the COVID-19 pandemic, he relocated to the village with his family. Three to four months ago, he again left for Kalol,” said Mr Chaudhary.

According to his relatives, Mr Patel supported his father in farming and even worked briefly in a school. Mr Chaudhary said, “He used to sell clothes in Kalol for a brief period during the Diwali festival.”

There has been no official confirmation on the identities of the couple and their two children, including an infant, who were found frozen to death while trying to illegally enter the US through Canada.

In the absence of an official communication from authorities, neither the family members nor the villagers are able to outright reject the possibility of the dead persons being Jagdish Patel, his wife Vaishali and their two children.

“I had no idea they were leaving for abroad. When I last met my cousin a few days before they left, he said he had obtained a visitor’s visa and was going to Canada with his wife and children. We have not been able to contact them since the news reached us last week,” said Jaswant Patel, his cousin who lives in the same village.

The family of four tried to cross the US-Canada border along with seven others who were caught by US authorities. However, these four could not reach the border and froze to death midway, according to reports.