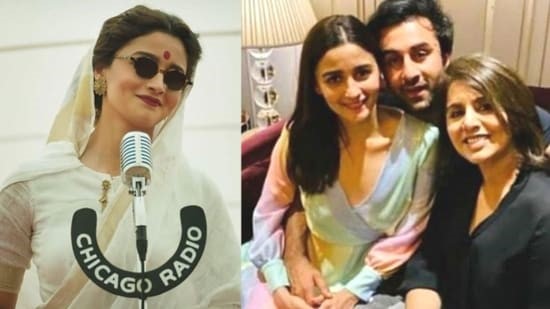 MUMBAI: Neetu Kapoor has shared an encouraging post on her Instagram Stories, inviting her fans to watch Alia Bhatt’s latest release, Gangubai Kathiawadi. Alia is dating her son, actor Ranbir Kapoor for a few years. On the day of Gangubai Kathiawadi’s release, Neetu shared a still of Alia from the film and wrote, “Watch how @aliabhatt hits the ball out of the park.”

Neetu had earlier praised the film’s trailer. Sharing it on her Instagram Stories, she had written, “Ufffff outstanding” with starry-eyes and raising hands icons, denoting she’s  cheering for her.

Ranbir’s sister Riddhima Kapoor and aunt Rima Jain watched the film during the special screening held in Mumbai on Wednesday. Later, Riddhima took to her Instagram Stories to shower Alia with praise. Counting her among legends, she wrote, “When two living legends come together and create magic #sanjayleelabhansali #aliabhatt what a fantastic movie! Brilliant performance! @aliabhatt you nailed it.”

Earlier, Ranbir Kapoor had cheered for Alia by doing namaste in Gangubai-style, as done by her in the film. When the paparazzi had asked his reaction to the film’s trailer, he had greeted them by lifting his hands and doing a namaste.

Gangubai Kathiawadi director Sanjay Leela Bhansali revealed Ranbir complained about Alia speaking like her onscreen character in real life. He said during a press conference at the Berlin Film Festival, “I think she’s become more Gangubai than Alia in real life. Her boyfriend complains about her speak like Gangubai at home. It’s just completely becoming one with the character.”

Gangubai Kathiawadi revolves around a young woman who was forced into sex trade and eventually became a prominent and celebrated figure in the Kamathipua red-light district of Mumbai. The film released worldwide in theatres on last month.