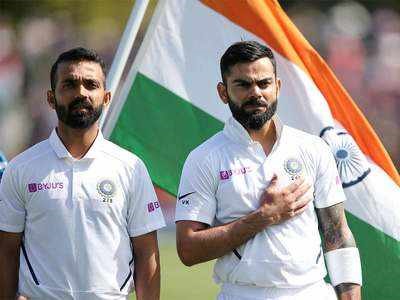 MELBOURNE:
‘Should Virat Kohli step down as India’s Test captain?’ This was the top
trending question on social media and various online media platforms after
Ajinkya Rahane led India to a phenomenal win in the Melbourne Test. Is it
justified to have a go at captain Kohli, who has won 14 Test series out of the
18 he has captained in for the country? Isn’t it good for India that the team
has two brilliant minds who can complement each other?

Rahane has shown in his short
captaincy career at the international level that he is an astute leader and an
instinctive captain. He exhibited those qualities in Dharamshala in 2017, when
India defeated Australia in the final Test with the series on the line, and
again during the Melbourne Test.

Both Kohli and Rahane have demonstrated they are shrewd leaders. It is not for
nothing India won the 2018-19 Test series in Australia under Kohli’s
leadership.

Their approach towards captaincy, on-field decision making and demeanour is
totally different. While Kohli wears his heart on his sleeve, Rahane is
unflappable. Kohli brings aggression and an in-your-face attitude on the field
while Rahane is phlegmatic. Kohli’s intensity is quite apparent. Rahane is
quietly determined.

“See, both are good readers of
the game. Virat is very passionate, Ajinkya, on the other hand, is very calm
and composed. Virat is more in your face, while Ajinkya is quite prepared to
sit back in a very calm and composed manner, but deep inside he knows what he
wants,” said coach Ravi Shastri about the two leaders.

Batting legend Sunil Gavaskar’s opinion is no different. “Virat is a lot
more passionate and in your face. Rahane is calm and composed. He lacks
aggression in his body language but not in his tactics. He is quite aggressive
with his tactics as captain. We saw that (aggression in field placings) with
the leg-gully, slip and forward short leg,” he said.

There are some major differences in tactical approach too. Kohli is someone who
wants to pepper the opposition with pace. His aggressive nature has made him rely
more on the fast bowlers in order to take the 20 wickets required to win a Test
match.

Rahane, on the other hand, is more intuitive and approaches a match with an
open mind. Case in point: Rahane introducing R Ashwin on Day 1 of the Melbourne
Test in the 11th over itself. There was moisture on the surface and Rahane’s
decision turned out to be a tactical masterstroke as Ashwin sent back Matthew
Wade and Steve Smith in his first spell. Outside the subcontinent, Kohli rarely
goes to his spinner so early; that too on the first day of a Test match.

Another noticeable difference
between the two is that Rahane loves to give his bowlers longish spells, as was
evident in Melbourne. Jasprit Bumrah started off with a six-over opening spell
on Day 1, Umesh bowled seven. And in one of his spells, Ashwin delivered 12
overs on the trot. Kohli, in contrast, resorts to shorter spells for his
bowlers. Sometimes one or two overs when wickets aren’t falling.

The team huddles are also different. When Kohli is the captain, it is mostly
him who does all the talking and motivates the team. Under Rahane, there were a
lot more voices. While Rahane spoke from time to time, Ashwin and Pujara were
also seen addressing the team.

One thing that stood out was
Rahane’s calmness on the field. When Tim Paine survived a clear run out due to
the third umpire’s largesse or when the reviews didn’t go in favour of India
because of the ‘umpire’s call’ clause in DRS, Rahane remained level-headed and
didn’t allow the team to get affected. Kohli, contrastingly, is an emotional
and excitable personality.

“His calm composure helped the
debutants as well as the bowlers. There was a calming influence out there in
spite of losing Umesh (Yadav),” added Shastri.