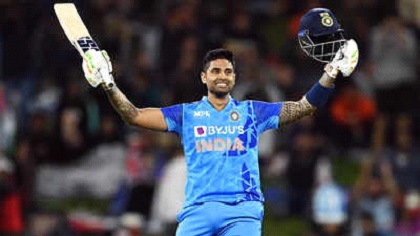 MELBOURNE : When you talk about the batting in T20I cricket, the mention of India’s Suryakumar Yadav becomes quite obvious. The in-form batter’s ability to play 360-degree and astonishing shots makes him everybody’s favourite and the latest to join the list is legendary Australia fast-bowler Brett Lee.

Lee thinks the top-ranked T20I batsman does not need to change his approach a bit and he should keep doing what he is doing.

“SKY was one of the highlights for me at the T20 World Cup. He continues to bat with the same attitude. Not only will he score big runs but he will also someday win a World Cup for Team India.

I love watching him play. My advice to SKY would be no advice. Keep doing what you are doing, don’t change, don’t complicate things, back yourself,” said Lee on his YouTube channel.

Surya also holds the record of scoring the most runs in the format this year (1,164 runs in 31 matches). The year 2022 saw Surya grabbing headlines in the shortest format of the game, bringing out exquisite strokes that very few had the opportunity to witness before.

Just after the T20 World Cup, Suryakumar enthralled cricket fans yet again when he smashed 111 not out off 51 balls against New Zealand at Bay Oval in Mount Maunganui.

“India did not win the T20 World Cup by the SKY rose. Of course, I am talking about Suryakumar Yadav. He is the new global T20 superstar. What a sensational 12-15 months he has had on the big stage.”

“He has shown here on Australian grassy wickets where the ball skids through. His fearlessness and his shot selection are like a chess grandmaster. His execution is awe-inspiring and the smile on his face when he plays it is priceless,” added an impressed Lee.

On Yadav’s technique of playing shots which has made him stand out from other players, Lee stated that his basics of the game are sorted and wants Rahul Dravid and Rohit Sharma to let him shine in the coming years for India.

“I like the way he executes the impossible shots because his basics are in place. He doesn’t go out there and just try to hit the ball that isn’t there to hit. He has a wonderful technique and he is definitely a player for the future.”

“You can trust Rahul Dravid and Rohit Sharma to just let him be the person he needs to be. The SKY would rise and this could lead to many more peaks for India in years to come.”