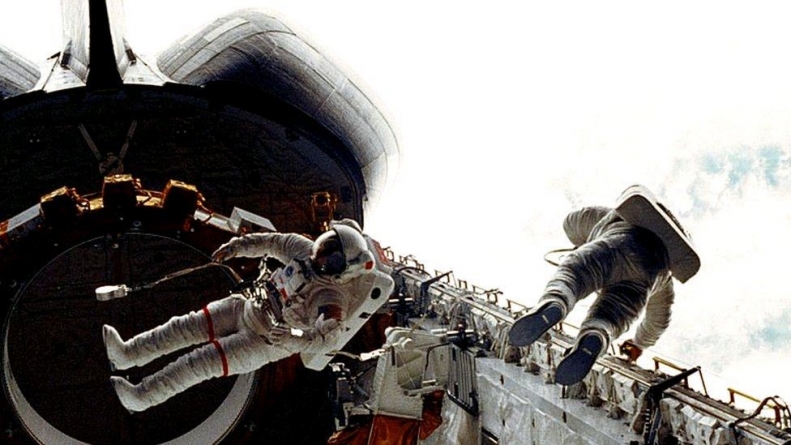 LONDON: On 7 April in 1983, American
astronauts Don Peterson and Story Musgrave bravely stepped out of the space
shuttle Challenger, the first time US space explorers had conducted a spacewalk
in nearly a decade.

For about
four hours, the men floated in the shuttle’s exterior cargo bay while tethered
to the spacecraft.

What they
were wearing, at the time, represented a revolutionary departure from the
custom-built, one-off spacesuits of the past.

Officially
known as Extravehicular Mobility Units, or EMUs, these were two-piece,
semi-rigid suits with 14 layers, designed to protect astronauts during
extravehicular activity (EVA).

The suits
included everything from communications gear to adult nappies and an in-suit
drink bag.

Since
that day in 1983, little has changed in the spacesuit fashion stakes.

The space
agency’s efforts to develop new improved spacesuits have had limited success. Nasa has already spent $420m (£310m) over 14 years without
any significant progress, according to a report published this year
from Nasa’s inspector general.

“A
flight-ready suit remains years away from completion,” the report notes,
adding that Nasa officials expect to spend a further $1bn (£740m) on design,
testing, qualification and development efforts before two flight-ready suits
are available for use.

The delay
to spacesuits is likely to hold up Artemis, Nasa’s programme to return to the
Moon in 2024, the report adds.

In
September, Nasa’s Johnson Space Center called for
private sector proposals for the new suits. They would be used for
spacewalks on the International Space Station (ISS) and during future Artemis
missions to the surface of the moon.

“Our
undertakings in low-earth orbit, at the Moon and beyond, have evolved and are
calling for innovative technology,” Nasa deputy administrator Pam Melroy
said in a statement.

“The
next astronauts on the moon, including the first woman, will be kept safe in
revolutionary spacesuits that fit better and enable greater human exploration
than ever before.”

The xEMU
will mainly be for planetary spacewalks on the Moon, Mars and perhaps other
bodies like asteroids, though it is planned to be modified for in-flight
spacewalks.

It will
have improved joints to give the astronaut more mobility, a new communications
system and will have a rear-entry hatch.

The
design will also be able to better fit astronauts of all sizes. In the past Nasa had problems finding spacesuits for smaller
female astronauts.

The Orion
suit is the suit crew will wear inside the spacecraft during launch and the
return to Earth.

Proposals
for the new suits are due on 1 December, with one or more contracts expected to
be awarded by the following spring. Nasa plans a demonstration spacewalk with
their newly developed gear as early as 2023.

“Nasa’s
investment in commercial spacesuits is another way that we are fostering a new
lunar economy with private partners,” Ms Melroy’s statement added.
“Similar to our partnerships in low-earth orbit, this endeavour will
create jobs and help fuel an active economy at the Moon.”

Tesla
boss Elon Musk was quick to offer his help, tweeting
that his company, SpaceX, “could do it if need be”.

In an
interview with the BBC, former Nasa administrator Sean O’Keefe says that he is
not really surprised that the space agency has turned to the private sector for
help.

“Every
variant of every space suit Nasa has ever used was developed in concert with
the private sector,” explains Mr O’Keefe, who is now a professor at
Syracuse University.

He added
that Nasa’s control over the performance requirements for the suit has largely
been driven by the fact that only government-sponsored and trained astronauts
have lived and worked in space and that has now changed.

“Now
that the commercial space industry has demonstrated an ability to develop a
space access transportation market, these companies will surely come up with
new ideas on operational performance characteristics based on their evolving
experiences,” Mr O’Keefe says.

The
current EMU model – which was only slightly upgraded in the 1990s – is
specifically designed for spacewalks around the (now decommissioned) space
shuttle and the International Space Station (ISS).

Among the
few who have used a space suit at the ISS is Daniel Burbank, a former astronaut
who in September 2006 logged a seven hour spacewalk at the station.

Mr
Burbank explains that spacesuits have remained largely unchanged, primarily
because of the fact they are now essentially “purpose built” for the
ISS, which was launched in 1998.

“The
design of the spacesuit is tuned and aligned to the needs of the space
station,” says Mr Burbank, now a senior technology fellow at North
Carolina-headquartered Collins Aerospace.

“There
are a lot of critical things that could happen to the outside of the space
station that provides its habitable environment,” he adds. “If those
fail, we need to be able to get spacesuits on very quickly, go outside and make
those changes.”

As an
example, Mr Burbank notes that the way the current EMU’s gloves work with
tools, the way the boots fit into portable foot restraints and even its size
are all built with the ISS and space shuttles in mind.

In the
future, however, new spacesuits will have to work for the US-led Artemis
programme, which will return humans to the moon for the first time since the
Apollo 17 mission in 1972.

For the
Apollo moon missions several decades ago, each astronaut was given three
tailor-made A7L suits: one for the mission, one for training, and one spare.

Made by
ILC Dover, they had multiple layers to protect the wearer from heat, abrasion
and micrometeoroids which could puncture the suit.

It was
one of these spacesuits that Neil Armstrong was wearing during the Apollo 11
landing in 1969.

Current
EMUs, Mr Burbank added, weigh over 150kg (23 stones), which even in the reduced
gravity environment of the moon would likely be too heavy and unwieldy for this
next generation of astronauts.

“A
suit that would support the full range of crew members in a gravity environment
on a non-engineered surface, we think has to look very different from the one
we have at the Space Station right now,” Mr Burbank says.

Both Mr
O’Keefe and Mr Burbank believe that future spacesuit innovations will largely
be driven by the private sector and the proliferation of commercial space
missions in the future.

For Mr
Burbank the experience of floating above the Earth in a spacesuit was one of
the most rewarding aspects of his experiences in space – one he hopes that new
space explorers will one day be able to share.

Mr
Burbank remembers flying over the Himalayas at eight kilometres per second
“like Superman”.

“You
don’t want to come in. You want to stay out there as long as you possibly can,
looking at the earth and all of its splendour,” he says. “We want
more people to have that experience.”