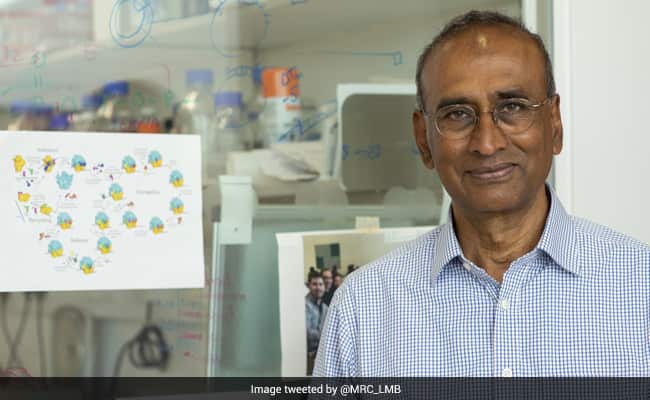 LONDON: India-born Nobel laureate Professor Venki Ramakrishnan has been awarded the prestigious Order of Merit by Britain’s King Charles III in recognition of his distinguished service to science.

The 70-year-old UK-based molecular biologist is among six appointments made to the historic order by the late Queen Elizabeth II before her death in September and the first to be appointed by Charles.

The Order of Merit is an exclusive mark of honour conferred by the British sovereign.

“The individuals were chosen by Her Majesty Queen Elizabeth in early September,” it said.

Professor Venki was born in Chidambaram in Tamil Nadu and studied biology in the US before moving to the UK where he is the Group Leader of the leading research hub MRC Laboratory of Molecular Biology at Cambridge University.

He received the Nobel Prize in Chemistry in 2009 for his work on ribosomal structure and was knighted by the Queen in 2012. He was President of the UK’s Royal Society from November 2015 until November 2020.

“Ironically, the first [Royal Society] Fellows to come into contact with India were colonisers like Robert Clive and Warren Hastings, or colonial administrators like Thomas Macaulay and Richard Temple. They certainly did not regard Indians as their equals in any way, and would frankly have been astonished that one day, someone born in India would go on to become a fellow, let alone a President of the Society,” Prof. Venki noted in his farewell address to the Royal Society two years ago. He is also a Foreign Member of the Indian National Science Academy.

More recently, he has been using electron microscopy to visualise ribosomes in action in higher organisms. This work has advanced human understanding of how the ribosome works and how antibiotics inhibit it.

In the past, he has also worked on histone and chromatin structure, which helps understand how DNA is organised in cells.

The Order of Merit, founded in 1902 by King Edward VII, is conferred on individuals of exceptional distinction in the armed forces, science, arts, and literature, or for the promotion of culture based on the personal choice of the monarch.

It is restricted to 24 members at any given time and the other new recipients this week include: broadcaster Baroness Floella Benjamin, architect Sir David Adjaye, nursing expert Dame Elizabeth Anionwu, University of Oxford professor Margaret MacMillan and geneticist and biologist Sir Paul Nurse are the other recipients of the honour.