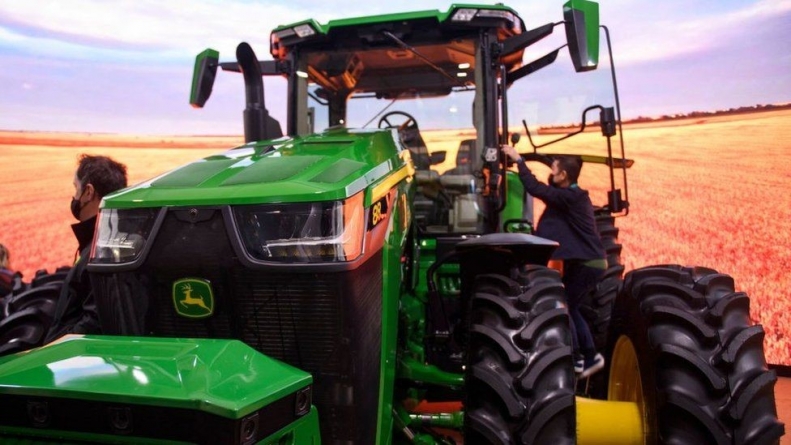 LONDON: Farm equipment maker John Deere has unveiled its first automated tractor that can till a field without a driver.

The heavy-duty machine can be activated by smartphone, using cameras and sensors to navigate farmland.

Instead of being a new machine, the automated functions are a kit that can be added to some existing tractors.

But John Deere said it has not decided if it will sell the kit directly – and is considering a lease or subscription model.

The company is not the first to showcase automated tractor technology, but is among the largest farm equipment makers in the world.

But safety remains a key concern.

Many farm injuries are caused by heavy equipment. Data from the UK’s Health and Safety Executive, for example, shows that being struck by a moving vehicle was the most common cause of fatal injury in agriculture, forestry, and fishing in 2020-2021.

Of the 41 deaths that year, 13 people were killed by being hit by a vehicle, while a further six were killed by machinery, including tractor attachments.

Agriculture remains far more dangerous than other employment sectors, with fatal injuries per 100,000 workers about 20 times higher than the average across all sectors.

Automated tractors and other farm equipment arguably remove the farmer from close proximity to heavy machinery, but also rely on the technology’s ability to detect potential dangers.

The company says it has been testing the technology for three years before its official unveiling, including on real-world farms.

John Deere told Reuters it planned a “low-volume” launch of the new technology, selling only 12 to 20 machines this year before “scaling up”. But once it does so, the new kit can be retrofitted to an existing 8R tractor in about a day, it told the news agency.

The company has also previously come under fire for its technology developments, which some farmers have argued make it much harder to repair their own equipment. John Deere opposed so-called “right to repair” rules in the US, arguing they posed a safety risk.

CES also featured a surprise announcement from Japanese tech firm Sony that it was going to build an electric vehicle to compete with Tesla and the established automotive giants.

Sony is best known for its PlayStation game consoles, televisions, cameras and audio equipment. Two years ago at the same show, Sony showed off its electric car concept, the Vision S, but never sold the car commercially. This year, it showed off an SUV model, the Vision S 02.

“With our imaging and sensing, cloud, 5G and entertainment technologies combined with our contents mastery, we believe Sony is well positioned as a creative entertainment company to redefine mobility,” Sony’s chairman Kenichiro Yoshida said.

Analyst Richard Windsor, from research company Radio Free Mobile, wrote that he was sceptical of Sony’s entry into the crowded electric car market.

“I have seen this cycle many times and it always follows the same pattern,” he said. “It happened with web portals, feature phones, smartphone user interfaces, app stores, AI chips and so on.

“Everyone decides to make one but only a few are any good… EVs are the latest and this cycle is likely to be particularly painful.

“For example, a good quality vehicle will have doors that open and close in exactly the same place, multiple times a day for more than 10 years. This is much harder than it sounds to produce but is central to the user’s experience of the vehicle,” he wrote.