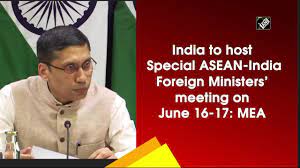 JARKARTA: India will host the Special ASEAN-India Foreign Ministers’ Meeting (SAIFMM) on 16-17 June 2022 to mark the 30th anniversary of our dialogue relations and the 10th anniversary of our Strategic Partnership with ASEAN. External Affairs Minister, Dr. S. Jaishankar and H.E. Mr. Vivian Balakrishnan, Foreign Minister of the Republic of Singapore, India’s Country Coordinator, will co-chair the meeting. Foreign Ministers of other ASEAN Member State and ASEAN Secretary General will participate in the SAIFMM. The year 2022 has been designated as ASEAN-India Friendship Year.

ASEAN-India dialogue relations started with the establishment of sectoral partnership in 1992 which graduated to full dialogue partnership in December 1995, Summit level Partnership in 2002, and Strategic partnership in 2012. Today, ASEAN-India Strategic Partnership stands on a strong foundation. ASEAN is central to India’s Act East Policy and its vision for the wider Indo-Pacific. This multi-faceted partnership encompasses many sectoral dialogue mechanisms and working groups that meet regularly at various levels and include annual Summit, Ministerial and Senior Officials’ meetings. The ongoing India-ASEAN collaboration is guided by the Plan of Action 2021-2025 which was adopted in 2020.

While ASEAN-India Foreign Ministers’ Meeting (FMM), hosted by ASEAN Chair, is an annual event, the SAIFMM would be the first ASEAN-India FMM to be hosted by India in New Delhi. The SAIFMM will be preceded by 24th ASEAN-India Senior Officials Meeting on 15 June 2022.

The SAIFMM will be accompanied by the 12th edition of Delhi Dialogue, a premier Track 1.5 Dialogue in ASEAN-India calendar, which will be hosted by India on 16-17 June 2022. The theme of DD-XII is Building Bridges in the Indo-Pacific. The Ministerial Session of DD-XII will be attended by EAM and the ASEAN Ministers.