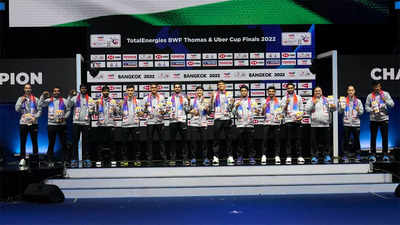 JAKARTA: Prime Minister Narendra Modi termed the Thomas Cup triumph of the Indian badminton team as one of the country’s finest sporting wins and invited the shuttlers to his residence on returning from Bangkok.

The PM never forgets to applaud the achievements of athletes, and on Sunday, he promptly dialled the players to congratulate them on their stupendous success, thanked their parents for helping them develop into world beaters and doing the country proud with their exploits on the global stage.

The Indian men’s team produced a historic performance to blank 14-time winners Indonesia 3-0 in the summit showdown of the prestigious tournament.

“You all have made it … It is one of India’s finest sporting wins,” PM Modi said during the call.

Flanked by his teammates, Kidambi Srikanth spoke to the PM first, followed by Lakshya Sen, HS Prannoy and Chirag Shetty.

The PM also took note of the fact the Indian team won the final without dropping a match, and mentioned it during the interaction with the players. He said it made the win even more special.
The PM said his office would coordinate the players’ visit to his residence.

Aware of India’s record in the tournament, the PM asked when did the team start to think that it could go all the way to pull off a win of this magnitude and create history.

Srikanth said that it was after the win over Malaysia in the quarterfinals that the team started to believe that it can do something special this time around. Sen and Prannoy echoed Srikanth’s thoughts, while thanking the PM for his encouragement and motivation.

Modi said the team’s coaches also deserve a lot of credit for this achievement, while observing that the quarterfinals was a neck-to-neck affair.

In beating Indonesia by such a margin, Lakshya Sen, Kidambi Srikanth and the doubles duo of Chirag Shetty and Satwiksairaj Rankireddy conjured one of the most remarkable feats in the country’s sporting history.

After being off-colour in the knockout stages, Sen delivered when it mattered the most as he gave India a 1-0 lead with a come-from-behind 8-21 21-17 21-16 win over world number five Anthony Sinisuka Ginting, in a superb show of temperament and skill.

The country’s best doubles pair of Satwiksairaj Rankireddy and Chirag Shetty then showed nerves of steel as it saved four match points in the second game to eventually outwit Mohammad Ahsan and Kevin Sanjaya Sukamuljo 18-21 23-21 21-19.

In the second singles, Srikanth produced a fine performance to outclass Asian Games gold medallist Jonatan Christie 21-15 23-21 in 48 minutes to seal the contest.