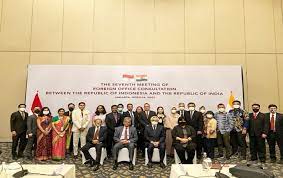 JAKARTA: The 7th round of India-Indonesia Foreign Office Consultations (FOC) was held on 14 April 2022 in Jakarta, Indonesia. The meeting was co-chaired by Shri Saurabh Kumar, Secretary (East), Ministry of External Affairs of India, and Dr. Abdul Kadir Jailani, Director General for Asia Pacific and Africa, Ministry of Foreign Affairs of Indonesia. The last FOC was held on 25 June 2021, virtually.

The talks were held in a friendly and cordial atmosphere. It was agreed to hold the next round of Consultations in India at a mutually convenient time.