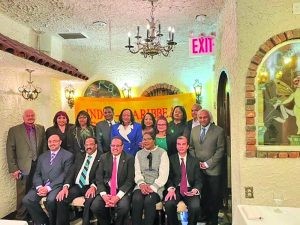 GEORGETOWN: Incumbent Ralph Tamesh, formerly of the Essequibo island of Wakenaam, was re-elected President for an unprecedented sixth term. Tamesh has been with the Federation for over 33 years, serving in various capacities. The organisation has grown during his tenure, and has been involved in various programmes.

In his re-election speech, President Tamesh thanked the members for displaying such strong confidence in his leadership as to elect him for another term. “I wish to thank everyone for the tremendous support given me. I also wish to salute you for your commitment, dedication, and the tireless service to the Federation,” he said.
He appealed to the executives to go on a membership drive, and said he looks forward for their continued support.

Tamesh also congratulated those who were elected in various positions in the executive leadership of the organization, and wished them well.
Stanley Raj, CEO of Main Street Insurance, who has been with the Federation for over 33 years, remains on the board. The committee members elected are Anoop Dhanpat, Son Son Sonipersaud, Lilly Lilliah, Radika Olarte, Jasodra Thakoordeen, Shanta Sookram, Shabier Yamin, Yvonne Singh, Sabrina Dyal, Imran Ahmad and Sunita Sookram.
Elected officers pledged to work harder to organise programmes for the community.

The Federation was founded in 1984 by Bhanu Dwarika, Vishnu Bandhu, Baytoram Ramharack, Rudra Nath, Ramesh Kalicharran, Gora Singh, Isherdat Ramdehal, Ravi Dev, Mahadai Das and this writer, among others. It organises the annual Indian Arrival Day celebrations in June in Queens. The outdoor celebrations were suspended over the last two years because of COVID restrictions.
Among other activities, the ICF plans and organizes the Annual Indian Arrival Day celebration going back to 1984, the Annual Cricket Match between Guyana and the Rest of the Caribbean, featuring current former national players from the various Caribbean countries.

Thanksgiving party for the Seniors in Richmond Hill, bus trips, a community publication, fundraising to rehabilitate health centres and schools in Guyana, receptions to honour prominent community stalwarts, holiday breakfast and luncheon have all been part of the activities of the organisation.