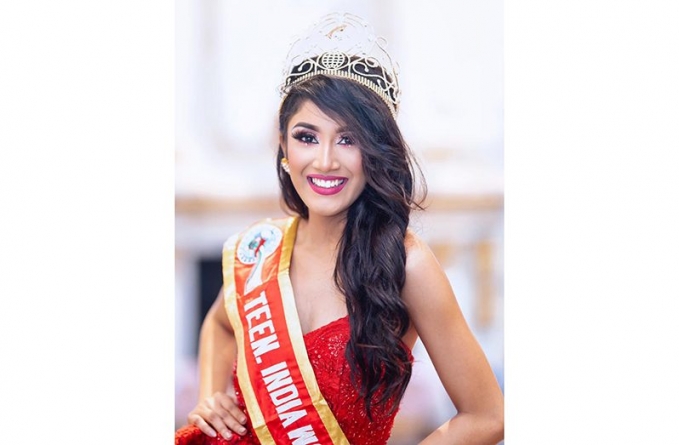 GEORGETOWN: COMING from a small rural indigenous village, St. Cuthbert’s Mission, with a population of just over 1,700 people, young Roshani (Beauty) Razack knew from a very tender age that she had bigger dreams than her community could have offered her and that she wanted to achieve more knowing the struggles her family faced with her upbringing.

Her journey to success began very early as a child but became even more evident after writing the National Grade Six Assessment (NGSA)/common entrance examinations in 2015, where she did exceptionally well earning a scholarship to travel to the city to earn her secondary education.

Fortunately, with a bit of enthusiasm and optimism, Razack became even more eager to shoot for the stars. This motivated her to challenge herself at the Caribbean Secondary Education Certificate (CSEC) examination where she scored 21 passes.

Beauty Razack aims daily to prove that any person can achieve anything they set their mind towards if only they are willing to work hard and if they’re determined to make the necessary sacrifices to attain such.

She states that we should never allow our circumstances or where we come from to affect us, instead use it as a stepping stone to greatness.

While many people know Miss Razack to be academically inclined, she finds it critical to be all-rounded and thus riffed her participation and ambassadorial positions in many areas globally.

Beauty Razack currently holds over 25 global titles and nominations and would have recently represented Guyana at the Caribbean Youth Ambassadors Program aimed at promoting leadership and civility among the countries in the Western hemisphere.

She is a Change maker with UNITE2030, an initiative that falls under the works of the United Nations.

Ambassador at Blessed Girls Global Chapter, Representative at the International Affairs Committee (IAC), Deputy Country Coordinator at the International Youth summit (IYS), United Nations Sustainable Development Goals (SDG) Ambassador, and Member of Cure Violence and Foundation for Environmental Education, among other local and international bodies that deal with the affairs of youth and the social ills of our global community.

She is one of the Co-authors of Blessed Girls International’s first book that is focused on the 4Cs (Civility, Creativity, Community, and Climate Change).

Beauty Razack is currently attending the University of the People in the United States where she is pursuing degrees in International Relations and Civil Engineering.
She is also pursuing an online law course at Peking University as she has the hopes of following careers in both law and engineering. She believes that a person or individual should not be limited to just one career path.

Just about a month ago, Miss Razack also represented Guyana at the Miss Teen India Worldwide pageant which was held in New Jersey, where for the first time in history, Guyana was able to bring home the coveted title and crown.

When asked about the journey, Miss Razack said “It wasn’t an easy road but with the right people to guide and support me, we’ve come out successful. And throughout, we’ve gained such great experiences: the network and bond created among the many countries represent social and civic cohesion and will be utilised to foster a global community where positive change is promoted greatly.”

Razack is grateful for the support from her family, sponsors and the Directors of Miss India Guyana Organisation, Mr Hashim Alli & Mrs Melicia Partab Alli.