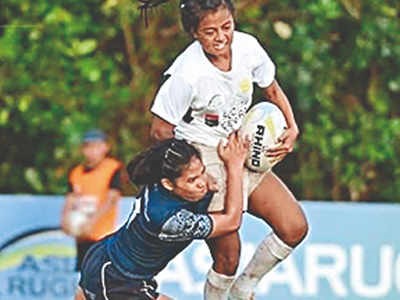 DHAKA: A
20-year-old daughter of tea garden labourers in north Bengal has carved out a
better future for herself, and is well on the path to leading several others
down a similar path. And it’s thanks to the rough-and-tumble sport of rugby.
Sandhya Rai has been announced “India
Unstoppable” in a global campaign
to promote women’s rugby, joining a rarefied list of Asian sportswomen
hand-picked to promote the sport by World Rugby, its governing body. She is one
of only three women from India to represent the country on the Asia Rugby
Unstoppables platform, a list that comprises the top 32 Asian women rugby
players.

The World Rugby ‘Unstoppable’
campaign has not only inspired girls and women across Asia and India to take up
the sport, but has also provided a platform to showcase and highlight the
inspiring stories of these girls and women, who transcended seemingly
insurmountable odds.
Bringing hope to tea-growing village with rugby magic

Sandhya was born and brought up near
Baikanthapur forest, east of Siliguri. The daughter of tea garden labourers,
she would have joined them in plucking tea after finishing school. But she had
different ideas, as did a small batch of remarkable girls from the village.
Their story revolves around a rugby ball and the passion it ignited in them to
not only change their own lives but also the outlook of the village. The
villages that make up Saraswatipur are bounded on three sides by the mighty sal
trees of the forest, home to elephants. The Teesta flows on the other side.
Electricity reached only recently and educational achievement levels beyond
Class X are rare.
Father Mathew had seen how motivating rugby could be for youngsters while he
was in charge of Don Bosco Ashalayam in Kolkata. Having spent time in the
village, he thought the game could also motivate the children there. In 2013, a
couple of players from the Jungle Crows, an amateur rugby team in Kolkata, were
invited by the local head of the Siliguri Salesian College to train some of the
kids in rugby and so the journey began.
Sandhya and her friends discovered rugby and through excelling in the game saw
a different future. Their hard work paid off, with nine girls from this remote
village so far having played rugby for India. On December 23, 2020, Sandhya was
announced as India’s Unstoppable.
Women’s rugby is particularly strong in India and has been championed much by
actor-director Rahul Bose, also an international rugby player. Sandhya has also
just launched a campaign, “Pass For Passion”, by the Jungle Crows to raise
funds for their Khelo Rugby project that creates opportunities for young
players like her. Kolkata film-maker Rohan Chakravarty has made a short film on
Sandhya’s story, highlighting in the impact she and her friends have had on
their village.