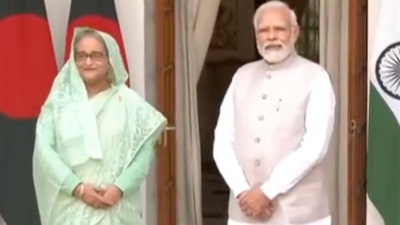 DHAKA : India and Bangladesh on Tuesday signed seven MoUs in the presence of Prime Minister Narendra Modi and his Bangladeshi counterpart Sheikh Hasina, in Delhi. Hasina began her four-day visit to India on Monday. She held bilateral talks with PM Modi to further strengthen the relationship between both countries at Hyderabad House.

Addressing a joint presser, PM Modi said that India and Bangladesh have decided to extend cooperation in various sectors, including IT, space and nuclear energy. Sheikh Hasina expressed hope that the issue of Teesta water sharing with India will be resolved soon.

PM Hasina highlighted the ties between both countries and called India the most important and closest neighbour of Bangladesh.

*MoU between the National Judicial Academy, India and the Supreme Court of Bangladesh on training and capacity building programme for Bangladesh judicial officers in India.

*MoU on cooperation in the areas of space technology

*MoU between the Prasar Bharti and Bangladesh Television (BTV) on Cooperation in Broadcasting.

Here are the top quotes from the joint presser by the Prime Ministers:
*”We have decided to extend cooperation in IT, space and nuclear energy, which are of interest to our younger generations. Talks are also underway between India and Bangladesh on power transmission lines,” PM Modi said in a joint statement with Bangladesh Prime Minister Sheikh Hasina.
*”We will also continue cooperating on climate change and preserving common heritage like Sundarbans,” he added.
*PM Modi congratulated Bangladesh Prime Minister Sheikh Hasina for her visit to the country and said, “Prime Minister Sheikh Hasina is visiting India during the Amrit Mahotsav of our freedom. And I am sure that the India-Bangladesh friendship will touch new heights in the next 25 years of Amrit Kaal.”
*”Last year we celebrated together the 50th anniversary of Bangladesh’s independence, the golden jubilee of our diplomatic relations, and the birth centenary of Bangabandhu Sheikh Mujibur Rahman. The same year, on December 6, we also celebrated the first ‘Friendship Day’ together all over the world,” he said.
*Regarding bilateral trade and cooperation, Modi said that today, Bangladesh is India’s largest development partner and trade partner in the region. The two countries look forward to further strengthening their ties. “Today Bangladesh is India’s largest development partner and our largest trade partner in the region.

There has also been a steady increase in our close cultural and people-to-people ties.” Modi said that Bangladesh has done noticeable development under the leadership of Sheikh Hasina and the bilateral trade between India and Bangladesh is increasing rapidly.
*Sheikh Hasina appreciated PM Modi’s leadership that continues to provide momentum to bilateral relations.
“I appreciate Modi ji’s visionary leadership that continues to provide added momentum to our bilateral relations. India is the most important & closest neighbour of Bangladesh. India-Bangladesh bilateral relations are known to be a role model for neighbourhood diplomacy,” she said.
*PM Modi further said that 54 rivers flow through the India-Bangladesh border and are linked to the livelihood of people in both countries, the two leaders have reached an agreement on the water sharing from the Kushiyara river. “Today we have signed an important agreement on water sharing from the Kushiyara River. This will benefit Southern Assam in India and Sylhet region in Bangladesh,” he said.
*Meanwhile, PM Hasina said, “The two countries have resolved many outstanding issues and we hope that all outstanding issues, including Teesta water-sharing treaty, would be concluded at an early date.” The Teesta river dispute is an important point of bilateral talks between India and Bangladesh. Both countries signed an agreement in 2011 to share surface waters at the Farakka Barrage near their mutual border.

*PM Modi said, “We have extended our cooperation on flood mitigation. We have been sharing real-time data regarding floods with Bangladesh & have also discussed terrorism. It’s imperative, that we together face the forces that are adversarial to us.”

*”We need to take lessons from the Covid pandemic and recent global happenings and must strengthen our economy,” he added.

“Today PM Modi and I have just concluded another round of fruitful discussions, the outcome of which will bring benefits to the people of both countries. We had the meeting in a spirit of close friendship and cooperation,” she said.

Earlier in the day, Hasina laid a wreath and paid tribute to Mahatma Gandhi at Rajghat in Delhi. She received a ceremonial reception at Rashtrapati Bhavan, where PM Modi and external affairs minister S Jaishankar was also present.

India is the biggest market for exports from Bangladesh and to enhance the trade ties a Comprehensive Economic Partnership Agreement between the two countries is underway. Bangladesh-India relations enjoy cooperation and development in almost every area.

The two countries have embarked on signing a comprehensive economic partnership agreement, which has been titled as Bangladesh-India Comprehensive Economic Partnership Agreement (CEPA), to reap the benefits of mutual trust and understanding in a range of bilateral issues.