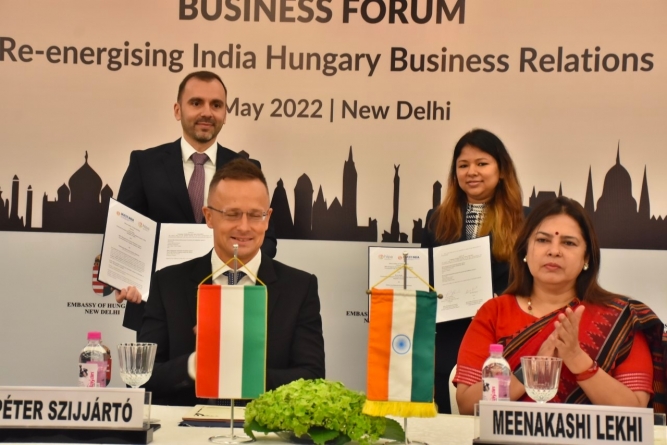 BUDAPEST: At the invitation of the External Affairs Minister (EAM) Dr. S. Jaishankar, Minister of Foreign Affairs & Trade of Hungary H.E. Mr. Péter Szijjártó, visited India on an official visit on 26-27 May 2022. He was accompanied by a high level business delegation.

India and Hungary share a warm and historical relationship based on mutual trust and understanding. Our bilateral relations are marked by strong linkages across institutions, academia, culture and people to people ties.

The two Ministers,over delegation level talks, discussed the entire gamut of bilateral relations, including political, economic, cultural and people to people ties. EAM thanked the Hungarian government for facilitating the evacuation of more than 6000 Indian citizens through the Ukraine – Hungary border and for their offer to accommodate evacuated Indian medical students in Hungarian universities.

The Ministers noted that bilateral trade was approaching US $ 1 billion, and Indian investments in Hungary were increasing across sectors. Both sides also agreed to further explore opportunities in various sectors including water, agriculture, food processing, health and S&T. The Hungarian side also signed the International Solar Alliance Framework Agreement.

Both sides also discussed cultural linkages and looked forward to the celebrations of Azadi ka Amrit Mahotsav as well as 75 years of establishment of diplomatic relations in 2023.

A India-Hungary Business Forum, co-chaired by Foreign Minister Szijjártó along with Smt. Meenakashi Lekhi, Hon’ble Minister of State for External Affairs, was also held on 27 May 2022 where senior business leaders from both countries participated.