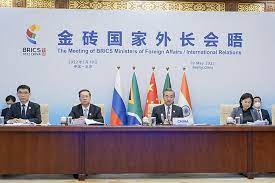 BRIZILIA: External Affairs Minister, Dr. S. Jaishankar, participated in the meeting of BRICS Ministers of Foreign Affairs/International Relations through video conferencing on 19 May 2022.

The Ministers exchanged views on furthering intra-BRICS cooperation on the three pillars of political and security, economic and finance, and people-to-people and cultural exchanges. In this regard, they recalled the adoption in 2021 of the revised Terms of Reference for guiding BRICS engagement.

They reiterated that the BRICS countries shall continue work together to contain the spread and effects of the COVID-19 pandemic and supported the leading role of the WHO in combating the pandemic; the importance of the on-going discussions in the WTO including on TRIPS waiver proposal; and called for the implementation of the 2030 Sustainable Development Agenda.

The Ministers discussed the situation in Ukraine and supported talks between Russia and Ukraine. They expressed concern at the energy and food security implications of the conflict.

The Ministers supported the call for advancing the process of reform and greater representation of developing countries in the international organizations and multilateral fora including UN and its Security Council so that they could play an important role in global governance.

The Ministers reiterated that the objectives, principles and provisions of the UNFCCC and its Paris Agreement must be honored. They stressed the importance of the fulfillment by developed countries of their commitments to provide technology and climate financing to assist developing countries to combat climate change.

The Ministers expressed strong condemnation of terrorism whenever, wherever, and by whom-so-ever and also expressed commitment to combat terrorism in all its forms and manifestations, including the cross-border movement of terrorists.

The Ministers participated in the dialogue between BRICS and developing countries on global governance and discussed greater engagement with the BRICS process.

The Ministers welcomed the developments and meetings in both B2B and P2P formats and looked forward to greater cooperation in these areas.