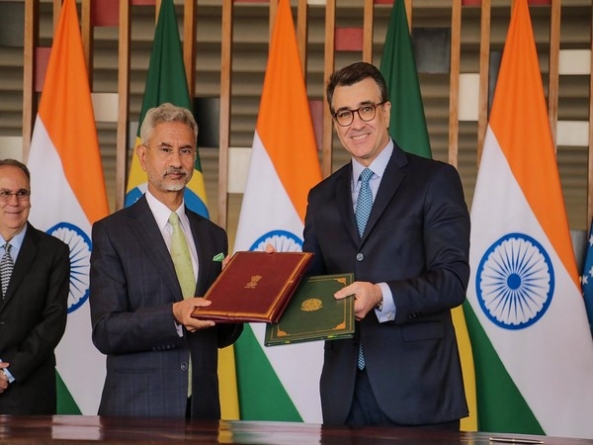 EAM recalled the State visit of H.E. Mr. Jair Bolsonaro to India from 25-27 January 2020 when he was the Chief-Guest for the Republic Day celebrations. The visit outcomes provided the basis for an upgraded engagement between the two nations. He also thanked President Bolsonaro for gracing the 75th Anniversary celebrations on 15th August held on board INS Tarkash with his presence.

The Strategic Partnership established in 2006 has deepened over the years to cover several sectors. The partnership is based on shared democratic values, a similar global vision, and a commitment to foster economic growth with social inclusion and sustainable development for the welfare of their people. The two countries also cooperate extensively in multilateral organisations, including the United Nations, and plurilateral fora such as G20, BRICS, IBSA, BASIC and G4.

The two Ministers held discussions on the entire gamut of bilateral relations. They reviewed trade and economic relations and expressed satisfaction over the steady increase in bilateral trade, despite the challenges posed by the COVID-19 pandemic. The total bilateral trade increased by 63.5% to US$ 11.53 billion in 2021 from the previous year, and India became Brazil’s 5th largest trading partner. They noted the great potential for growth and diversification of bilateral trade and urged the private sector to explore opportunities in the respective markets.

The Ministers emphasized the importance of holding the 6th Meeting of India-Brazil Trade Monitoring Mechanism (TMM) in Brasilia at the earliest opportunity to discuss bilateral trade-related issues. Further, the two Ministers also expressed their support for early expansion of scope of the India-MERCOSUR Preferential Trade Agreement.

The Ministers recognized the importance of agriculture and livestock production and trade for development and food security. In this regard, they welcomed the willingness of the concerned authorities of both countries to establish a technical committee on agricultural and livestock trade, with the objective to address specific market access issues, sanitary and phytosanitary measures and regulatory systems, and to exchange information, expertise and experiences in this field.

India’s External Affairs Minister noted Brazilian investments in areas such as IT services and equipment, machinery, energy, auto parts, defence products, fintech and healthcare materials. The Brazilian Foreign Minister acknowledged that a significant number of Indian companies have been investing in Brazil in sectors such as oil, mining, engineering, tractors manufacturing, information technology, pharmaceuticals, agrochemicals and power transmission. The two Ministers agreed on the potential for expansion of the sectors in which companies have invested both in Brazil and in India.

The Ministers welcomed the signature of the Protocol Amending the Convention for the Avoidance of Double Taxation and the Prevention of Fiscal Evasion with Respect to Taxes on Income (Protocol to the Double Taxation Agreement) between Brazil and India, which should increase the competitiveness of companies and foster new investments between the two countries.

Both sides expressed satisfaction over the recent progress in bilateral cooperation in ethanol production, cattle breeding and dairy development. They also expressed strong desire to increase the level of cooperation in defence, science and technology, and health-related areas. In this regard, the Brazilian side thanked the Government of India for the supply of COVID-19 vaccines during the pandemic.

In this regard, both Ministers noted with satisfaction the progress made in the field of cooperation in bioenergy and biofuels. They referred to the visit of the Brazilian Minister of Mines and Energy to India in April 2022 and echoed the decision made on that occasion to keep working towards the establishment of an India-Brazil Alliance for Bioenergy and Biofuels. They acknowledged the potential for further cooperation in this sector as well as its important role in achieving sustainable development.

The two Ministers appreciated the close coordination between the two countries in the United Nations Security Council in 2022, when both countries coincided as elected members. They also reaffirmed the urgent need for a comprehensive reform of the UN Security Council, especially its expansion in both permanent and non-permanent categories, to make it more representative, effective and responsive to contemporary challenges to international peace and security.

Both Ministers highlighted the importance of the G20 and agreed to cooperate closely during the upcoming presidencies of India (2023) and Brazil (2024).

Ministers França and Jaishankar agreed to give new impetus to IBSA, which congregates India, Brazil and South Africa, three large democratic, pluralistic, and diverse societies from three continents, in favor of the interests of the developing world and South-South cooperation. Both Ministers also welcomed the cooperation under BRICS, which has delivered meaningful results to both countries since its creation.

The Ministers welcomed the signing of the Memorandum of Understanding between Empresa Brasil de Comunicação (EBC) and Prasar Bharati, India, to exchange their own contents produced to various platforms. Both ministers further recalled the Cultural Exchange Programme 2020-2023 and welcomed the organization of cultural activities under its auspices, in particular the exhibition “Brasilia 60+ and the construction of modern Brazil”, in New Delhi, from May to July 2022, as well as the conducting of many activities under the Azadi Ka Amrit Mahotsav (series of events organized by the Government of India to commemorate the 75th Anniversary of Independence) since March 2021.

Both Ministers exchanged congratulations on India’s 75th Anniversary of Independence (15 August) and Brazil’s Independence Bicentennial (7 September), as the meeting took place close to these auspicious dates. On this occasion, a special commemorative stamp was released by the Brazilian Post to mark the 75 years of India’s independence. They also stated that they look forward to commemorating in 2023 the 75 years of the establishment of diplomatic relations.

The Ministers stressed the importance of the Joint Commission Meeting mechanism and agreed to hold the next meeting in India in 2024 at a mutually convenient date.

This author has not added a biography. Meanwhile Hariom has contributed 893 posts. Click here to view them.