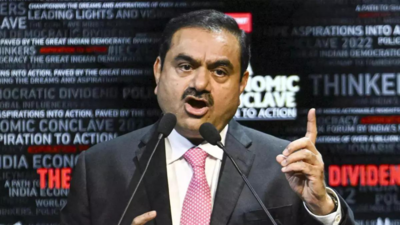 BERN: Asia’s richest man Gautam Adani’s group on Sunday said it has clinched a deal to acquire a controlling stake in Holcim Ltd’s businesses in India for USD 10.5 billion, marking the ports-to-energy conglomerate’s entry into the cement sector. The Adani Group will acquire 63.1 per cent of Ambuja Cements Ltd along with related assets. Ambuja’s local subsidiaries include ACC Ltd, which is also publicly traded.

“The Adani Family, through an offshore special purpose vehicle, announced that it had entered into definitive agreements for the acquisition of Switzerland-based Holcim Ltd’s entire stake in two of India’s leading cement companies – Ambuja Cements Ltd and ACC Ltd,” the group said in a statement.

“The value for the Holcim stake and open offer consideration for Ambuja Cements and ACC is USD 10.5 billion, which makes this the largest-ever acquisition by Adani, and India’s largest-ever M&A transaction in the infrastructure and materials space,” the statement said.

Holcim in a statement said, “The corresponding offer share prices of Rs 385 for Ambuja Cement and Rs 2,300 for ACC translate into cash proceeds of CHF 6.4 billion (Swiss Franc) for Holcim.”

Adani has in the last couple of years diversified beyond its core business of operating ports, power plants and coal mines into airports, data centres and clean energy.

The world’s largest cement maker Holcim last month announced its exit from the country after struggling here for a long. The company through two listed entities ACC and Ambuja has 66 million tonnes per annum capacity (MTPA).

ACC has 17 cement manufacturing units, 9 captive power plants and 6,643 employees along with a distribution network of 56,000 dealers & retailers and a countrywide.

Ambuja Cements has a cement capacity of 31 million tonnes with 6 integrated cement manufacturing plants and 8 cement grinding units across the country.

In 2015, Holcim merged with France’s Lafarge to create LafargeHolcim. In June 2016, Ambuja had bought Holcim India’s 24 per cent stake in ACC, which resulted in the latter becoming Ambuja’s subsidiary with a 50.05 per cent stake.

Holcim’s exit is part of the group’s ‘strategy 2025’ that aims for sustainable solutions for the building materials sector. The significance of cement in the overall group is already declining compared to ready mix concrete, aggregates, roofing, and green building solutions.

UltraTech Cement, with a consolidated capacity of 119.95 Million Tonnes Per Annum (MTPA) of grey cement, is a leader in the segment.

“Our move into the cement business is yet another validation of our belief in our nation’s growth story,” said Gautam Adani, Chairman of the Adani Group. “Not only is India expected to remain one of the world’s largest demand-driven economies for several decades, India also continues to be the world’s second largest cement market and yet has less than half of the global average per capita cement consumption.”

In statistical comparison, China’s cement consumption is over 7x that of India’s. “When these factors are combined with the several adjacencies of our existing businesses that include the Adani Group’s ports and logistics business, energy business, and real estate business, we believe that we will be able to build a uniquely integrated and differentiated business model and set ourselves up for significant capacity expansion,” said Adani, who recently overtook Mukesh Ambani as the country’s richest man.

Adani added that Holcim’s global leadership in cement production and sustainability best practices brings to us some of the cutting-edge technologies that will allow his group to accelerate the path to greener cement production.

“In addition, Ambuja Cements and ACC are two of the strongest brands recognized across India. When augmented with our renewable power generation footprint, we gain a big headstart in the decarbonization journey that is a must for cement production. This combination of all our capabilities makes me confident that we will be able to establish the cleanest and most sustainable cement manufacturing processes that will meet or exceed global benchmarks.”

“I am delighted that the Adani Group is acquiring our business in India to lead its next era of growth,” said Jan Jenisch, CEO of Holcim Limited.

“Gautam Adani is a highly recognized business leader in India who shares our deep commitment to sustainability, people and communities. I would like to thank our 10,000 Indian colleagues who have played an essential role in the development of our business over the years with their relentless dedication and expertise. I am confident that the Adani Group is the perfect home for them as well as our customers to continue to thrive.”

With India’s cement consumption at just 242 kg per capita, as compared to the global average of 525 kg per capita, there is significant potential for the growth of the cement sector in the country. The tailwinds of rapid urbanization, the growing middle class and affordable housing together with the post-pandemic recovery in construction and other infrastructure sectors are expected to continue driving the growth of the cement sector over the next several decades.

Ambuja Cements and ACC currently have a combined installed production capacity of 70 million tonnes per annum. The two companies together have 23 cement plants, 14 grinding stations, 80 ready-mix concrete plants and over 50,000 channel partners across India.

“Both Ambuja and ACC will benefit from synergies with the integrated Adani infrastructure platform, especially in the areas of raw material, renewable power and logistics, where Adani Portfolio companies have vast experience and deep expertise. This will enable higher margins and return on capital employed for the two companies. The companies will also benefit from Adani’s focus on ESG, Circular Economy and Capital Management Philosophy,” the statement added.