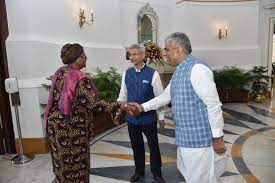 During the visit the Deputy Prime Minister met with the Vice President of India. She also had an extensive round of bilateral discussions with External Affairs Minister, Dr. S. Jaishankar and Minister of Environment, Forest & Climate Change, Shri Bhupender Yadav.

Three MOUs were signed during the visit, these are (a) MoU on ‘Wildlife Conversation and Sustainable Biodiversity Utilization between India and Namibia, (b) Agreement between Namibia and India on ‘Authorizing Spouses and Dependents of Members of the Diplomatic Mission to Engage in Gainful Employment and (c) MoU between National Forensic Science University (NFSU) of India and Namibian Police Forensic Science Institute (NPFSI).

The visiting DPM delivered her address at the inaugural of the CII Exim Bank Conclave on 19 July 2022. On the sidelines of the Conclave, a country session on doing business with Namibia was also held on 20 July 2022 where prominent business houses and business persons were present. The visiting DPM also had business meetings covering several sectors of the economy including small industries, renewable energy, agricultural equipment and technology, startups and vaccine manufacturing among others.

The visit by the Deputy PM & Foreign Minister of Namibia is expected to give a strong fillip to the bilateral relations between the two countries.