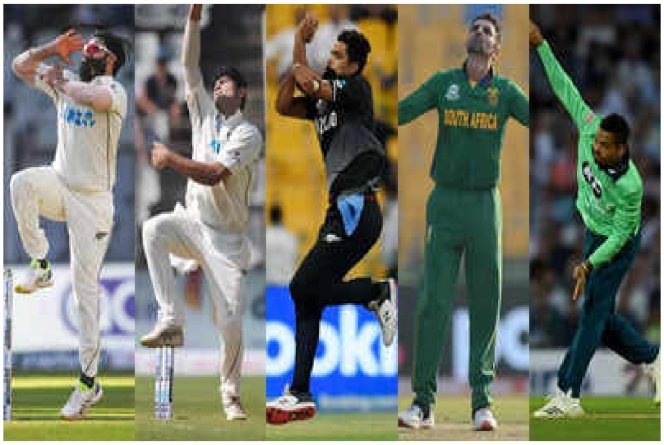 WELLINGTON : Mumbai-born New Zealand player Ajaz Patel recently etched his name in the history books, becoming only the third bowler ever to pick up a 10-wicket haul in an innings in Test cricket. Ajaz’s rare record was registered against India in the recently concluded second Test in Mumbai, where the left-arm spinner registered figures of 10 for 119 in the first innings and match figures of 14 for 225.

With his rare feat, Ajaz joined a super exclusive club, which since 1999 had only two other members – Jim Laker and Anil Kumble.

The record was nothing less than a fairytale for Ajaz as he clinched it in the city of his birth – Mumbai. The city of dreams, was where Ajaz was born in 1988 and spent his childhood days. Ajaz’s family moved to New Zealand in 1996 and from there on his journey as a New Zealander and a cricketer began.

Cut to 2021, at the age of 33, Ajaz has represented New Zealand in 11 Tests and has already entered the most elite bowling club of Test cricket.

But the journey of Ajaz — an India-born player representing another nation at the highest level — is not a rare one. Over the decades, there have been many players — batsmen and bowlers — who have had Indian origins but have played for other nations and have gone on to be the best in the business.

There have been and still are many Indian origin players who have represented countries like USA, Oman, Canada etc. and also European nations, who are gradually climbing up the ladder in international cricket.

TimesofIndia.com takes a look at some of the prominent current spinners across full member countries who are of Indian origin:

Standing at 5 feet 6 inches, Ajaz Patel so far has played 11 Tests and 7 T20Is for New Zealand. Making his first class debut in 2012, Ajaz wore the Kiwi national colors for the first time in 2018.

In 1996 Ajaz’s family decided to move to New Zealand from Mumbai’s Jogeshwari area. Ajaz was 8 years old when he shifted base to Auckland. Ajaz, there, first started as a pacer but then switched to spin bowling in his early 20s.

From there on, cut to 2021, he recently became only the third bowler in Test cricket’s 144-year-old history to register a Perfect 10. Ajaz so far has three 5-wicket hauls in Test cricket and has best figures of 4 for 16 in T20Is.

Budding star Rachin Ravindra is another such story of an Indian origin player representing New Zealand in recent times. The 22-year-old, who is jointly named after Indian legends Rahul Dravid and Sachin Tendulkar (Ra-chin) made his debut for New Zealand in 2021 itself and so far has 2 Tests and 6 T20Is to his name.

Rachin, born in 1999 in Wellington to Indian parents, made his first class debut in New Zealand in 2018.

Rachin’s father Ravi Krishnamurthy, is an Indian software engineer who moved to New Zealand in the mid-90s.

The left-arm orthodox spinner so far has 3 and 6 wickets in Tests and T20Is respectively and also has 107 runs with the bat in international cricket.

Ish Sodhi is a player Indian cricket fans know well. The 29-year-old has been a regular part of the Kiwi set up in the limited-overs format in the recent past. But the leggie was not born and brought up in the island nation.

Born in Ludhiana, Ish’s parents migrated to Auckland (New Zealand) when Ish was very young. From there on, the leggie played his early cricket in Auckland and honed his spin skills on spin unfriendly pitches of New Zealand.

Ish, so far has represented New Zealand in 17 Tests, 33 ODIs and 66 T20Is and also played a crucial role in his team’s journey to the final of this year’s T20 World Cup.

South African left-arm orthodox spinner Keshav Maharaj was born and brought up in Natal, Durban but has an Indian connection. His father Athmanand is an Indian-born South African, who, in his initial days played for Natal Province in South Africa. He however, could not represent South Africa during his playing days as the country, in the early 90s, was banned from international cricket in the Apartheid era.

However, Athmanand’s son Keshav is nowadays a key figure in the Proteas setup. A bowler, who also has enough skills with the bat, has been a Protea spearhead in spin bowling in recent times.

The 31-year-old, so far has represented South Africa in 36 Tests, 15 ODI and 6 T20Is and has 155 combined wickets to his name across formats. Keshav also has 835 runs to his name with the bat across formats with a highest score of 73 in Tests.

One of the biggest names in T20 cricket and a Kolkata Knight Riders veteran, Sunil Narine is a household name in the Caribbean and also in India, thanks largely to his long association with the IPL. The mystery spinner who is known for tormenting the opposition batting lineups has ruled the shortest format of the game in recent times.

He had to change his bowling action and struggled initially after doing so. In recent times though, Narine seems to have found his groove again. With the bat too Narine has shown his hitting prowess, tonking the bowlers out of the park on a given day. He was used by KKR as an opener from the 2017 edition onwards and developed into a powerful striker of the cricket ball and a very useful pinch hitter.

Narine also has Indian origins. His ancestors moved to the Caribbean and Narine was born and brought up in Arima, Trinidad and Tobago.

The now 33-year-old’s shot to fame came when he bagged ten wickets in a trial match and then, in January 2009 he got a call up for the Trinidad and Tobago squad. After that Narine went on to make his international debut for West Indies in 2011 and has never looked back since.

Narine has represented West Indies in 6 Tests, 65 ODIs and 51 T20Is but nowadays focuses mostly on playing franchise cricket around the world.