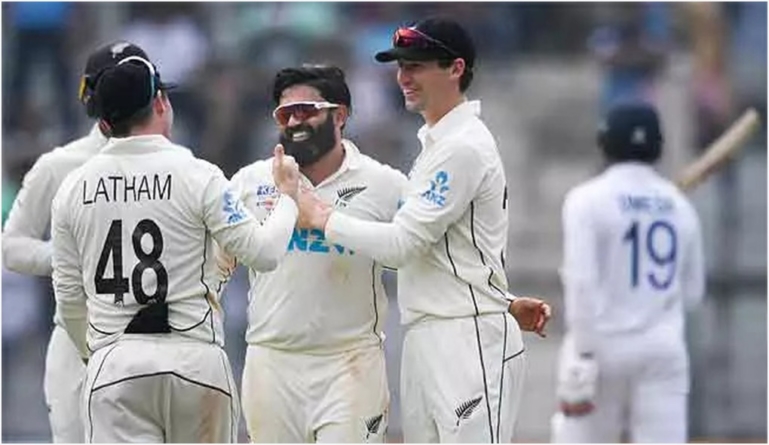 WELLINGTON: Not too many Indian cricket fans would have known much about Ajaz Patel before the ongoing Test series vs New Zealand. But now his name has been firmly etched in the history books.
The 33 year old took all 10 Indian wickets in the India first Innings. With this he became just the third bowler in the history of Test cricket to take all 10 wickets in an innings.

Only Jim Laker and Anil Kumble had achieved this very very rare feat before this.

Englishman Jim Laker took 10-53 vs Australia at Manchester in July 1956. Anil Kumble meanwhile had figures of 10-74 vs Pakistan in Delhi in February 1999.

Incidentally, Ajaz who is currently playing his 11th Test match for the Kiwis was born in Mumbai in October 1988 and this was the first time he was playing in Mumbai in his career. He chose the perfect setting to create this incredible record.

Ajaz, who is incidentally the fifth India born cricketer to play for New Zealand, shifted to New Zealand with his family when he was eight years old.

Earlier when the left arm spinner was asked about playing a Test match in the city of his birth Patel had spoken about how it did make him emotional.

“It is emotional. I was thinking about how many times I had left that airport but this time I am representing New Zealand….When I got off at the airport, I had a lot of flashbacks about leaving Mumbai for the first time and coming back for the first time. It will be a special moment for me, something I will look back on fondly in the future.” Patel had said.

Earlier Kiwi fast bowler Mitchell McClenaghan had revealed how Ajaz had once turned up as a net bowler for the Mumbai Indians while he was on holiday in Mumbai with his family a few years ago.

Ajaz started off as a pace bowler. It was former Kiwi cricketer Dipak Patel who suggested to him to try out left-arm spin.

Patel finished with figures of 10-119. His teammates rushed to congratulate him and the crowd at the Wankhede applauded him warmly. This is one spectacle that no one who witnessed it at the ground or watched on TV will ever forget, just like Laker’s and Kumble’s feats will always be remembered and celebrated.

Anil Kumble, who was the second bowler in the history of Test cricket to take all 10 wickets in an innings meanwhile congratulated Ajaz and welcomed him to what is a very elite club, which has just found its third member.