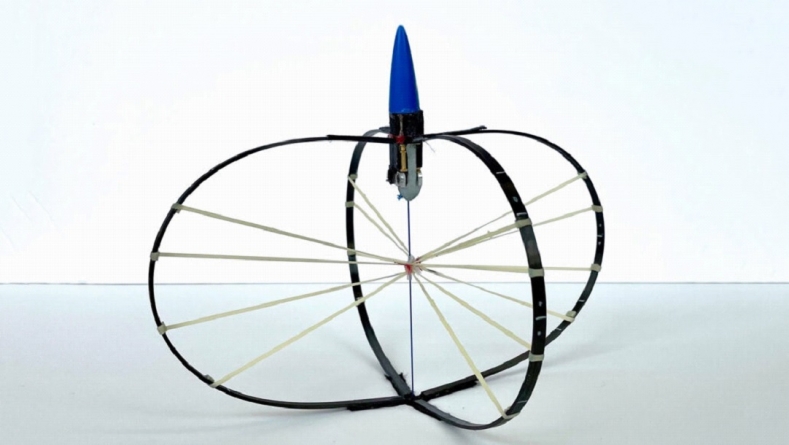 WASHINGTON : What’s the size of a soccer ball but can jump a distance spanning from the Statue of Liberty’s feet to her eye-level? A new record-setting robot. It soars three times higher than any other jumping robot that its builders know of. It also out-jumps any living creature.
“It is truly amazing to stand near it and see it launch itself skyward faster than you can even see,” says Elliot Hawkes.
A mechanical engineer at the University of California, Santa Barbara, Hawkes has been working on this robot for seven years. It started out as a “stick with weights and rubber bands,” he recalls. No one would have called it a robot at that point because it had no motors or electronic parts. But, he notes, it got him and his colleagues thinking, “just how high could we go?”
After years of work, the robot has reached heights of 30 meters (100 feet), Hawkes and colleagues reported in Nature on April 27.
This robot’s springy legs are made of carbon fiber, a super-strong material. Rubber bands add extra spring but also help hold the legs together. Some versions of the robot didn’t have rubber bands. These “had a bad habit of exploding instead of jumping,” says Hawkes. “The legs would break and fly into a hundred pieces!”
Powerful muscles
These researchers studied how animals jump. They looked into leaping frogs, spiders, kangaroo rats, squirrels, lizards, dogs and more. But Hawkes’ group didn’t want to copy any of these animals. Instead, the team learned what features set the limits for animal jumpers. Then, the group found ways around those limits.
In the bodies of many animals (including humans), muscles provide the energy for a jump. The muscles tug on stretchy tendons, which act like springs. As they stretch, those muscles and tendons store energy. They release it again as they snap back to their normal length. The stored energy propels the jump. Jumping higher requires bigger muscles.

But a muscle can only tense and release once per jump. So you only get one chance to crouch down in order to jump high. In a motor, this is called one stroke. Most animal jumpers develop large motors (muscles) and small springs (tendons).
Weight is another limit. Larger muscles (or motors) make something heavier. And heavier things find it harder to move against the force of gravity. “If you want a robot to jump high, you need to balance a lot of different parts,” says Cynthia Sung. A roboticist at the University of Pennsylvania in Philadelphia, she was not involved in the new study.
Stretchy springs 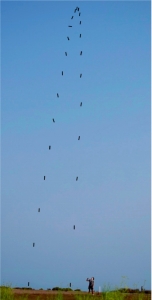 This robot takes off so quickly that it experiences an acceleration of 315 g — or 315 times the force of gravity. That would kill a person. But many tiny insects can endure that many g’s. The froghopper (or spittlebug) reaches 400 g when it leaps.Brian Long, Amy Hao, Chris Keeley and Elliot Hawkes
A robot jumper can use a small, light motor and a large spring. That’s because it can use a latch to keep the spring in place while the motor gradually stretches it out. With each stroke of the small motor, the spring stretches a bit more. This is called work multiplication. Even if a single stroke of the motor isn’t very powerful, its power gets multiplied over many strokes as it is stored in the spring.
Hawkes’ team used this type of system to maximize how high a robot can jump.
The new robot has two types of springs. It has legs that bend into a hoop shape. As these legs bend, rubber bands connected to them also stretch. By the time the robot is ready to jump, it has a squat, round shape. When the latch releases, the legs and rubber bands all snap back into a narrow shape similar to a model rocket. That’s not an accident: This shape will easily cut through the air.
As the springs snap, the robot shoots skyward. In just 9 thousandths of a second, it can go from sitting still to shooting upwards at nearly 100 kilometers (60 miles) per hour, says Hawkes. That amount of sudden acceleration would kill a person. When the robot lands, it can now position itself for the next jump.
Shooting for the moon
“It’s very exciting,” says Sung. She was impressed with how high the robot leapt. And maximizing height was the main goal here. However, for the robot to be useful, it will need some improvements.
“They don’t have any steering at all,” notes Sung. That means this robot can’t control its jump height or direction. Sung’s team has made its own jumping robot, named REBOund. That bot can’t jump very high. But it can be programmed to jump to any of several different heights.
Hawkes’ team is working to add steering to its robot. These researchers hope to send their robot to the moon, so they also want to find a way for it to collect samples. A jumper can go places a robot with wheels can’t. “[This type of robot] could leap into the bottom of a crater, take samples and return to a wheeled rover,” points out Hawkes. His team is already working with NASA. They hope to turn their robot into a space explorer.