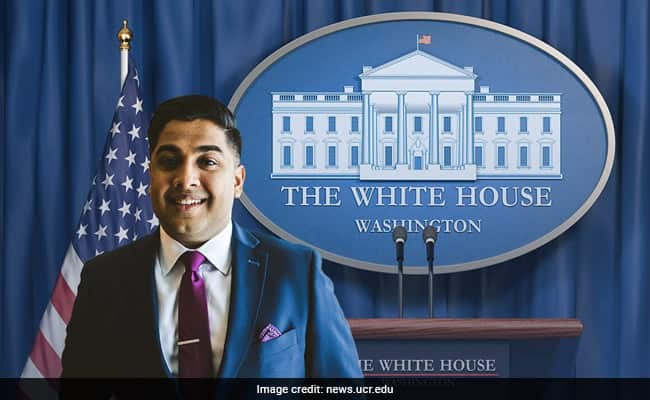 “I often joke with him (Vedant Patel) that we give him easy assignments. We did not. It’s just because he’s super talented,” Ms Psaki told reporters at her daily news conference in presence of Patel.

“Vedant, I’ll say about him, he’s a beautiful writer. He’s a fast writer. I don’t know if that means he could be a wire reporter. I think he has a very promising career in government ahead of him,” she said in a rare gesture.

She described his contributions as “amazing” for “everything he does to help me, help all of us, help the President every day”.

At the White House, Vedant, 32, is popular among reporters. He has a desk in the lower press office and handles all media queries related to immigration and climate change.

Before joining the administration, he was a senior spokesperson at the Presidential Inauguration Committee and was a regional communications director in the Biden campaign.

Vedant Patel started his career as deputy communications director to the former Congressman Mike Honda from December 2012 to November 2015. Thereafter he served as Communications Director for Mike Honda for Congress from Nov 2015 to January 2017.

After that, he served as regional press secretary and director of AAPI Media from April 2017 to November 2018 and was communications director to Indian American Congresswoman Pramila Jayapal from November 2018 to April 2019.

In an earlier tweet, Vedant Patel had said that he and his family moved to the US in 1991.

“We moved here in 1991 & it’s because of their (parent’s) sacrifices & hard work I’m able to sit here in the White House working for” the President, he said.

Priya Singh was the first Indian American White House Press Assistant from 2009 to 2010 during the Obama Administration.

Raj Shah served as the White House Deputy Press Secretary from 2017 to 2019 under the Trump Administration.